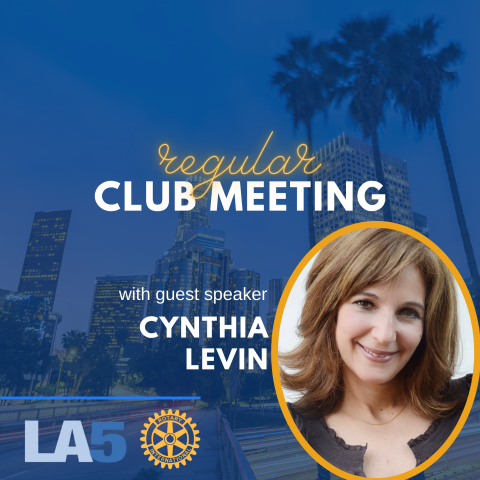 This meeting is sponsored by Northwestern Mutual, member Harlan Gleeson.

Chicago native Cynthia Levin was taking improv classes at The Second City Player’s Workshop and the Training Centre for the Working Actor by age 15. It was in these idea incubators and in her untethered upbringing where she learned the art of authentic truth telling—because someone had to do it. As her mother explained one day over half a sandwich and soup, “You’ve always been the truth-teller in the family, but you know what? Nobody wants to hear it!” To Cynthia’s surprise, the right audiences did want to hear it—in her writing, directing, stand-up comedy, and her chameleon-like characterization of original personalities in film and episodic productions and on stage. By combining her vulnerability and sardonic wit with life experience, she has become one of the industry’s leading voices for fresh, unexpected comedic storytelling.

Throughout her career, Cynthia has written, produced, directed, and starred in 13 one-woman shows for venues and festivals across North America and the U.K. After launching a stand-up career that now spans 30 years, she quickly became a regular at L.A. clubs like The Comedy Store and the Improv and later at New York City clubs, including The Comic Strip Live and Stand Up NY. Cynthia’s stand-up experience has taken her around the globe, including performances in Latin America, Canada, Asia, and Europe. While focusing on the creation of original comedic content, she continues to build her film and series credits as an actor, including her most recent role in the FX Network’s “Legion.”

In 2005, Cynthia began writing “Unprepared for Life: An Almost True Story, Except for the Good Parts…Those Had to be Made Up.” Not a stranger to the pitfalls of life, she found that the stories kept coming, and thus her episodic live-action and animated series was born. She starred in live productions of the show in London and Dublin and at the Edinburgh Fringe Festival in Scotland with reviews celebrating her “hilarious anecdotes and warm presence on stage” and a show that “appeases your inner slacker while at the same time making you feel better about your life.” Cynthia returned to Hollywood to perform the live show in segments at The Hotel Café while working on a pilot, proving that she is finally prepared for this ”Unprepared” adventure.