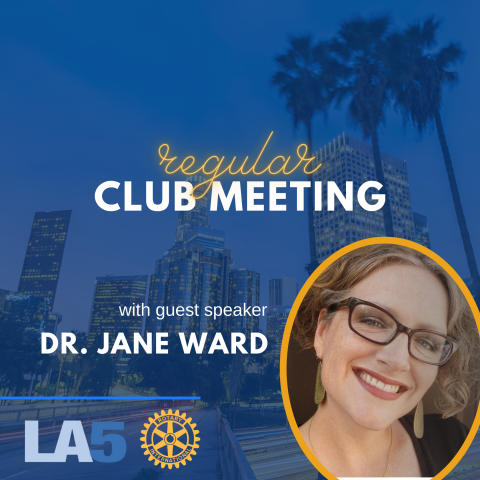 Jane Ward is professor of Gender and Sexuality Studies at University of California Riverside, where she teaches courses in feminist, queer, and heterosexuality studies.  Ward's published work focuses on a broad range of topics, including: the marriage self-help industry, the rise and fall of pickup artists, how early lesbian feminist ideas shaped contemporary gender politics, the meaning of sex between straight-identified men, queer childhood and parenting, the evolution of straight culture, the corporatization of gay pride festivals, the race politics of same-sex marriage, the social construction of whiteness, feminist pornography, and trans relationships.

Ward is the author of multiple  books, including  The Tragedy of Heterosexuality,  described by The New York Times Book Review as "at heart a somber, urgent academic examination of the many ways in which opposite-sex coupling can hurt the very individuals who cling to it most. " Her book  Not Gay: Sex Between Straight White Men (2015) was  featured in Newsweek, New York Magazine, Forbes, The Guardian, BBC, Washington Post, USA Today, Huffington Post, Salon, Vice, and Slate. Her first book, Respectably Queer: Diversity Culture in LGBT Activist Organizations, was named by The Progressive magazine as a best book of 2008 and has been featured on NPR.  ​

Jane Ward is also a baker, an urban gardener, and a parent to one human child, one potbelly pig, nine chickens, and one cat. She lives in Southern California with her comrade Kat Ross and their kiddo.​