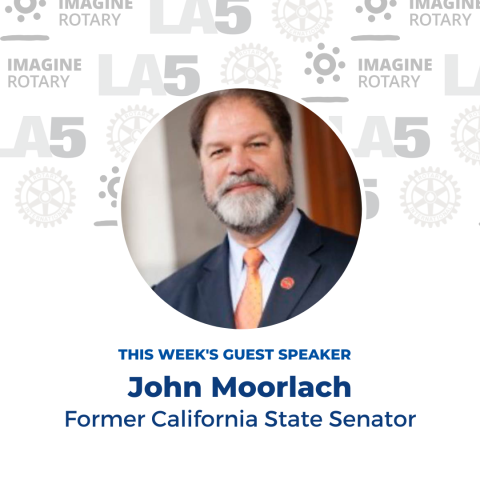 As someone who follows the Rotary 4-Way Test, Moorlach especially emphasized the principle of attempting to require fiscal policies to be "beneficial to all," and not just heavily financed special interest groups.

John M. W. Moorlach, Certified Public Accountant and Certified Financial Planner (both currently inactive), was the managing partner of the Orange County office of Balser, Horowitz, Frank & Wakeling, An Accountancy Corporation, founded in Long Beach in 1937 (since merged with Ronald Blue & Co CPA), when he ran for Orange County Treasurer-Tax Collector in the spring of 1994.

In the course of this campaign Moorlach predicted the County’s December 6, 1994 filing of bankruptcy, the largest municipal Chapter 9 in United States history at that time.  He was appointed to replace the disgraced incumbent on March 17, 1995, serving until the end of 2006 after being elected Orange County Supervisor, for the two-term limit, and then elected to California State Senator, 37th District, in 2015, where he served for six years.

A 1977 graduate from California State University in Long Beach, Moorlach has enjoyed an action-packed career and was recognized in 2014 as the CSULB College of Business Administration Distinguished Alumnus of the Year.

In 1994, Moorlach was a member of the Costa Mesa Rotary Club and a Paul Harris Fellow.

Moorlach is a regular commentary contributor on municipal finance and political issues for The Epoch Times and other publications.  He is a Senior Fellow for the California Policy Center and consults with other businesses.

Moorlach has been married for 42 years.  He and his wife, Trina, have three children and seven grandchildren.