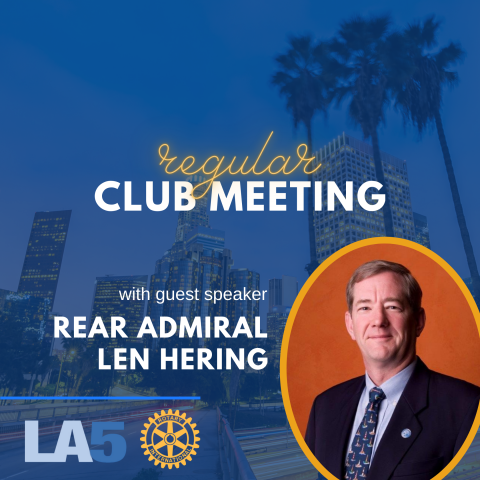 This meeting is sponsored by LA5's Sustainability Committee

Rear Admiral Leendert “Len” Hering Sr. is a member of the Center for Climate and Security’s Advisory Board. A native of Portsmouth, Va., he retired from the US Navy in 2009 after serving with distinction for over 32 years. A Surface Warrior by trade he rose to become a prominent military and civilian sustainability leader with a broad background in base operations, facility support, energy and environmental issues. His passion in sustainability lies in educating people on the dangers the future holds without taking responsible actions to address climate change, securing our nation’s energy independence, preserving access to clean water, air quality and other resources.

Hering holds a B.S. in Meteorology and Oceanography from S.U.N.Y. Maritime College, a M.S in International Relations and Strategic Studies from the Naval War College and an M.B.M from Salve Regina University.

While a Flag Officer, his principle efforts were focused on everything from renewable energy to responsible water use and conservation of all types. He built a team recognized throughout the Department of Defense as the best in environmental protection and sustainable innovation. Within three years, the team reduced energy consumption by nearly 42%, diverted 70% of Navy waste from landfills and reduced water consumption by more than one billion gallons, saving tens of millions of taxpayer dollars. Hering instigated wind, thermal, photovoltaic and conversion technology at all levels in Navy facilities. President Bush awarded Hering a 2005 Presidential Award for Leadership in Federal Energy Management.

In 2009, Hering joined the University of San Diego, where as vice president for business services and administration he initiated numerous sustainable measures on the campus. Within the two years he served, USD installed the largest solar system of any private campus in the country, instituted the most comprehensive water abatement project in the school’s history and reformed numerous business practices to help control costs. His efforts resulted in saving more that 3 million gallons of water per year and more than $1 million in electrical costs.

Today, Hering serves as the President and Executive Director of the Center for Sustainable Energy. A 501(C)3 firm dedicated to accelerating the transition to a sustainable world powered by clean energy. The Center for Sustainable Energy™ (CSE) provides people with information, incentives and opportunities to help make these choices easier. They work with policy makers, public agencies, local governments, utilities, business and civic leaders and individuals to transform the nation’s energy marketplace and beyond.

In 2007 Hering founded what is now the largest sustainability business partnership in San Diego County, the San Diego Regional Sustainability Partnership, a consortium of business, government, academic and community organizations promoting practices that support a sustainable future for the region.

He serves on several non-profit boards and is currently the Chairman of the Board for the Charter Schools of San Diego.

He has been married to his wife Sharon of Northeast Maryland for 37 years and together they have raised 3 incredible sons who have blessed them with 5 grandchildren, and counting. They are my inspiration for getting this right and doing what I do daily.