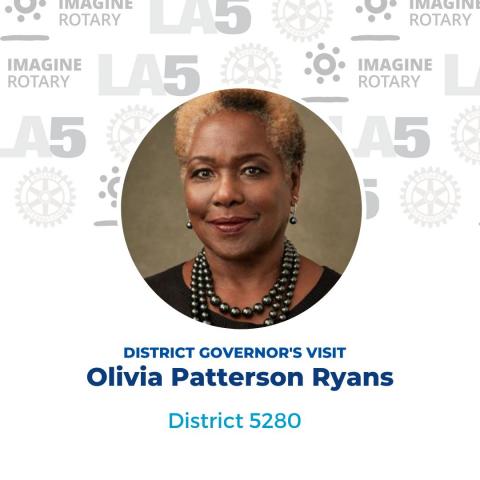 presided over by Past President Alan Bernstein

Born in Chicago, the oldest of six children, Olivia learned leadership, management, organization, accountability, and responsibility while growing up in Los Angeles, CA. Olivia attended Pepperdine University, earning a BS in math and psychology, and a Masters in Administration and Management of Schools.

Olivia has always strived for leadership roles as her way to be of service. As president of the Rotary Club of Inglewood, she developed an interest in the business of Rotary and grew active on the district level. Attending District Humanitarian Trips, Olivia saw first-hand her foundation donations at work across the borders. It is Olivia's belief that if we are sincere about the work we do as Rotarians through Rotary, the Rotary Foundation should be the first charity on our list for giving.

The greatest gift given to Olivia, by Rotary, is her beloved husband. She finds immense joy in having a life partner who shares her Rotary values and experiences. The two work and play with the most unlikely folks from communities all over the world, developing friendships and partnerships while helping those in need.

Olivia served on the board of directors of Music Mends Minds and as an ambassador for the Rose Bowl parade.

Featuring a presentation from the Myanmar Water Project

The Myanmar Water Management Systems Project is a signature 17-year service project by the Los Angeles Rotary Club of Los Angeles.  The water towers are built and constructed in Myanmar which serves over 100,000 orphanages and remote villagers.

The Water -- Polluted water from the river, such as chemical pollutants, waste from other villages, even poisons used (illegally) by commercial fishermen, were causing dysentery, cholera, stomach pains, even deaths.  Many existing tube wells had too much arsenic content, causing sickness and skin irritation, or worse, keeping many children from school and the joyful play of childhood.  In addition, tsunamis and cyclones had a devastating effect in the area destroying entire villages.

The Rotary Myanmar Water Management Systems Project began in 2005, founded by 47-year Rotarian J.T. Warring.  He had first led a Rotary team in March 2005, to video document the devastation wrought throughout many Asian countries on Boxing Day, 2004, at a cost of 270,000 human lives.  Their onsite filming resulted in a documentary viewed by many Rotarians and clubs called, Aftermath of a Tsunami.  In connection with this mission, he visited Myanmar that Spring, was introduced to the need for clean water for people, especially the many orphanages that took in additional children who lost their parents.  In 2006-2007, J.T. Warring, under of the original auspices of District 5320, began building water systems for the many underserved villages in the Ayeyarwady Delta.  It has now completed 82 Water Management Systems in Myanmar and has been visited by six (6) RI Past Presidents and one (1) RI Past Foundation Chair.  Ultimately, the continued work directly resulted in the reestablishment of Rotary as an organization in Myanmar.  In 2014, Myanmar became a “Rotary Country.”