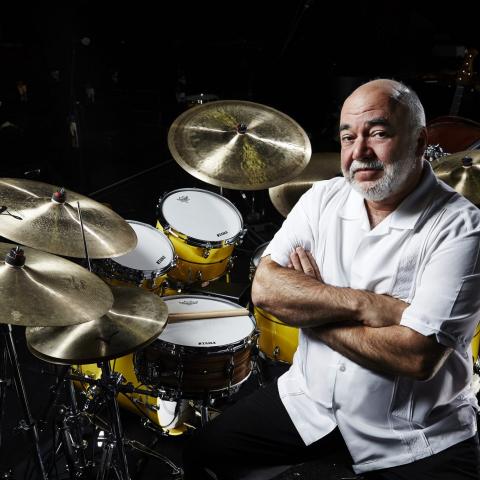 Peter Erskine has played drums since the age of 4 and is known for his versatility and love of working in different musical contexts. He appears on 700 albums and film scores, has won 2 Grammy Awards and was awarded an Honorary Doctorate from the Berklee School of Music. Fifty albums have been released under his own name or as co-leader.

He has played with the Stan Kenton and Maynard Ferguson big bands, Weather Report, Steps Ahead, Joni Mitchell, Steely Dan, Diana Krall, Kenny Wheeler, Mary Chapin Carpenter, The Brecker Brothers, The Yellowjackets, Pat Metheny & Gary Burton, John Scofield, et al, and has appeared as a soloist with the Beethoven Orchester Bonn, plus the London, Los Angeles, Chicago, BBC Symphony, Bochum, Tokyo Metropolitan, Yomiuri Nippon, Oslo and Berlin Philharmonic orchestras. He premiered Mark-Anthony Turnage’s “Erskine — Concerto for Drumset & Orchestra” with Beethoven Orchester Bonn and performed it at the Hollywood Bowl with the Los Angeles Philharmonic. Peter has been voted ’Best Jazz Drummer of the Year’ ten times by the readers of Modern Drummer magazine and was elected into its Hall of Fame in 2017.

Peter graduated from the Interlochen Arts Academy and studied at Indiana University under George Gaber. Peter is an author with several books to his credit, including“No Beethoven” — an autobiography and chronicle of the band Weather Report — plus his latest title, “The Musician’s Lifeline.” Peter is Professor of Practice & Director of Drumset Studies at USC, and conducts masterclasses worldwide, while his latest endeavors include several innovative play-along apps for iOS.