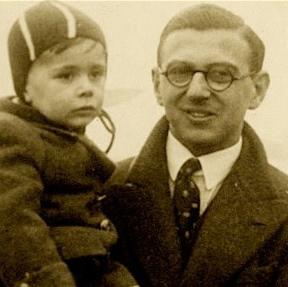 Sir Nicolas Winton, whose Kindertransport saved 669 Czech children from the Nazis in 1939, has passed away. Mr. Winton was an active member of Rotary International’s Maidenhead, UK, chapter, and was considered to be the world’s oldest active Rotarian at the time of his passing.

In early 1939, at age 29, Sir Nicolas used his international contacts to transport Jewish children from Czechoslovakia and place them with families in the UK. As most children did not have relatives in the UK, he had to find adoptive parents. He then had to secure all necessary paperwork (and often forged documents when he didn’t have the right papers), and pay a fee of 50 pounds per child (about $3000 in today’s money), which he raised from donors. He then greeted the trains filled with children as they arrived in London’s Liverpool Street Station.

Sir Nicolas never told anybody about his deeds for almost 50 years, when his wife discovered the records of children in a scrapbook while rummaging through the attic. In 1988, the British show That’s Life aired a special on his life. In one of the most memorable moments on television, the presenter looked at Sir Nicolas and his wife, who were sitting in the audience, and asked the audience if anybody in the room had been saved by Mr. Winton. All at once, dozens of audience members stood up; the studio was filled with the grown-up children whom he had saved.

An active Rotarian until his death, Mr. Winton was a member of the Maidenhead, UK, chapter, which is 15 miles west of Heathrow Airport. After the war, he worked with refugees. He worked with Mencap, which helps those with learning disabilities, and was made a MBE in 1983 for his work. In his later years, he worked with the elderly in the  Abbyfield organization; one of his fellow volunteers was the son of a child whom hehad saved.