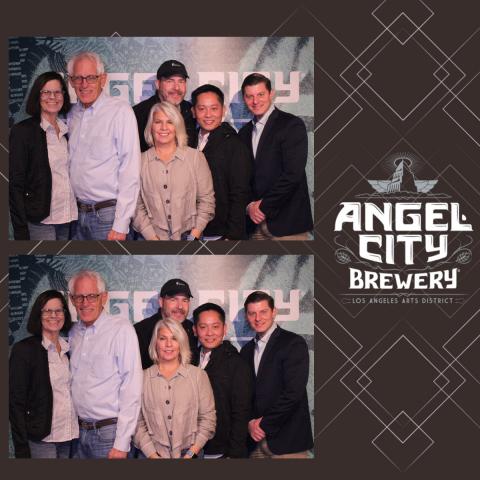 On Sunday afternoon a jolly group of about 25 LA5 members assembled in our spacious reserved area at the Angel City Brewery downtown in the Arts District. Approaching from the street they could see the faint but distinct original name on the large building “Roebling Company”—the location where in the early decades of the1900’s steel cable for the Golden Gate Bridge was manufactured. The crowd at this watering hole included an eclectic group with a large preponderance of interestingly dressed artists and their pals.

The Brewery is quite a scene: with tables both inside and out there were in excess of 200 people in attendance. The bar was long and busy with at least 3 bartenders working at all times. Popular beer for our members included the Pilsner and their India Pale Ale—IPA.

Our area included a large picnic table (where outstanding pizza from a local shop was served) and a number of additional tables—both high and low—which facilitated our members and guests to gather in congenial groups. LA5-ers were delighted by the participation of two Past Presidents, Marc Leeka and Jose Vera and their lovely wives. Most remained for the afternoon engaging in two favorite pastimes: drinking beer and talking to friends in a slightly edgy place all had heard about but most had never visited. This outing is likely to become an annual event. Following is a photo of the happy group that closed out the afternoon.