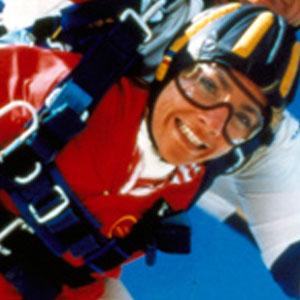 Annie Ruth has been a member of the Rotary Club of Los Angeles since 1996. A native of Rancho Palos Verdes, she is the youngest of four children. She graduated from USC with honors, where she was a member of Delta Gamma Sorority. She completed her MBA from Pepperdine University, and is a computer forensics consultant on investigations, assisting the business sector.

As a child she loved athletics: skiing on snow and water, playing tennis, and exercising in gymnastics class. It was in the gym, when she was five years old, that Annie’s life changed dramatically. While trying to do a somersault off a balance beam, she landed on her neck and pinched her spine. The accident damaged her spinal cord and left her a C1–C2 Quadriplegic, which meant she would never again move her arms or legs. The accident made normal breathing impossible.

Annie spent nine months at Rancho Los Amigos National Rehabilitation Center in Downey before it was possible to go home to Rancho Palos Verdes. Since then, she has become an inspiration to several generations of Rancho patients and staff, and to people everywhere because of the way she handled the accident that could have ended her life. But she refused to give in, or give up.

Annie is a world-renowned artist, and one of the founders of the Art of Rancho program (member of Mouth Foot Painters Association, MFPA). “My art is very colorful and joyful,” she said. “It makes people feel a little better, even if just for the moment. Life is hard for a lot of people, and I’m glad I can bring a little bit of happiness into their life.”

Annie worked with a Governance Committee for the state of California on the employment of people with disabilities, giving scholarships to companies that employed disabled people. She also served on the equipment advisory committee for the California Public Utilities Commission to provide accessible cell phones for the deaf, hard of hearing and physically challenged. She serves on the board of directors for the Blind Children’s Center and for the Fulfillment Fund, which gives scholarships to students in LAUSD.

Annie has gone skydiving, hang gliding, paragliding, and white water rafting, too. She also carried the torch for the 1984 Olympic games. She remarked, “It’s a thrill to do these different things, and I love them all.  It’s a challenge, but you just figure out a way to make it work, you go for it, and you make it happen.”

A huge baseball fan, Annie also owns a part of Los Angeles Dodger history. She and her family attended a home game during the time when Steve Garvey was in the worst slump of his career. He visited with Annie before the game, and said to her, “I’m going to get a hit for you tonight.” He went five-for-five that game, which included two doubles and a Grand Slam home run. This was the best day of Steve Garvey’s career! Annie was a good luck charm for Steve, just as she had brought inspiration and hope to many more.

She continues working to be more patient in her daily struggles, and admits it is an important part of her life to keep her mental and emotional perspectives in proper sync. So how has Annie Ruth accomplished so much good after being struck with tragedy? She has developed a motto that helps her, and others, overcome life’s obstacles: Inch-by-Inch, Life’s a Cinch!