Be the Inspiration – Courageous Citizens! 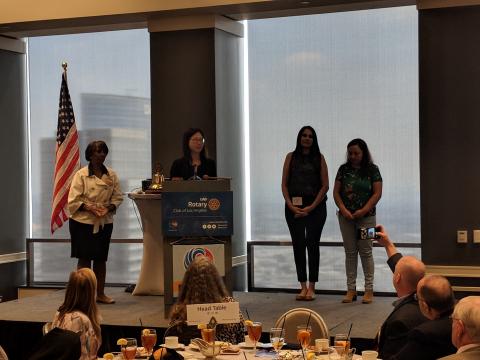 One way that LA5 exemplifies “service above self” is in recognizing and honoring champions in the community who take action to help save the lives of others.  This year’s annual Courageous Citizen Award event featured five heroes aiding children.  As LA5 member District Attorney Jackie Lacey stated in her introduction, “we need to do more to safeguard children, the most vulnerable members of society who count on us, when others don’t, to defend and protect them from harm and neglect.”

She mentioned that she does such ceremonies at other Rotary clubs with different heroes, all of whom could have looked the other way from another’s need, but instead chose to get involved.  As a result, they took time out of their jobs and lives to work with the criminal justice system, with the DA’s office, and often to testify in court.

One courageous citizen so honored was Sylvia Reyna who through clear, level-headed action saved her children, herself, and others from potential harm. This past June, Ms. Reyna at a taco stand. She was standing next to her car in which her four young children were eating when she was confronted by a man in plain clothes who flashed a police badge at her. When he did so, she saw a handgun in his waistband. To distract him she offered him a taco which he accepted, then coolly walked to a nearby group of people and alerted them. Someone called the police who quickly arrived and arrested the man.

Next were three women who all acted to save the life of a three-year-old boy. He was found wandering alone on a busy 101 Freeway on-ramp and clad only in a dirty diaper. Three drivers, Jenny Unger, Alexandra Plascencia, and Veronica Gonzalez independently pulled over on the ramp to get the toddler out of harm’s way. Ms. Gonzalez called the police and as they waited with him, wrapped him in a blanket and gave him water. Authorities arrived and soon found the mother, living in a nearby tent.

Lastly, a young man unknowingly helped save a child being used by his mother for pornography. Joshua Anderson was visiting a male co-worker’s home. When borrowing his phone, Mr. Anderson noticed disturbing pornographic photos of a three-year-old who was not his co-worker’s son. Mr. Anderson quickly left the house, phone in hand. The co-worker confronted Mr. Anderson, threatening bodily harm, but Mr. Anderson refused to give it back. Upon consultation with Mr. Walker, his grandfather, Mr. Anderson brought the phone to the authorities, who arrested the man and soon located the woman supplying the young victim’s images. Mr. Walker accepted the award for his grandson Joshua Anderson.

It was gratifying to learn that the perpetrators of the taco and pornography cases were convicted. The mother of the wandering toddler was offered assistance services to help ensure a better future and to keep him out of the foster care system. In the face of these sad and disheartening situations, these courageous citizens saved young lives and helped removed dangerous people from the streets. They made a difference!

The meeting concluded with the welcome of our newest club member, Executive Assistant Jennifer Gregg. Past President Charisse gave a warm introduction about Jennifer and then officially pinned her into LA5!