Boys to Men in Uganda﻿ 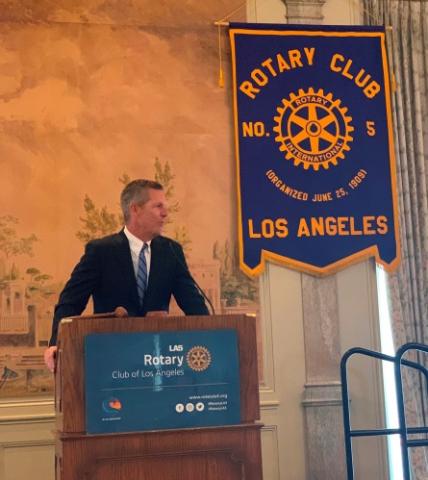 What do you, I, any of us do when the situation calls for involvement? For LA5 member Laine Wagenseller that question was easily answered by: showing up getting involved and caring. Ten years ago, as he explained through his story and photo presentation, Laine was asked by church friends to attend a meeting about their upcoming trip to the Bringing Hope to the Family orphanage in Uganda. Not even knowing where the country is –east central Africa - he went to the meeting and found himself agreeing to join them on what became a life-changing trip.

Initially he worked on basic but important tasks such as painting, digging wells and other labor and met the 40 boys residing there at the time. The experience was so meaningful to him that he went back the next year. He was taken to a nearby farm connected to the orphanage, essentially run by the boys with minimal adult supervision. He began to really connect with the boys by asking them to tell him about their background. Laine heard compelling and even heartbreaking stories, and was moved by the boys’ resilience despite their circumstances. He reflected as to how vulnerable they were in candidly opening up to him while making them even more admirable.

In the meantime he was doing some reading, in particular the book Fathered by God by John Eldridge. It states that boys need male role models on which to model their own lives, they need to be recognized as a beloved son as the first stage of boyhood and to create a successful manhood, not a “macho” manhood but one based on love and affirmation. This got Laine thinking of how he could work differently with the boys; rather than building buildings, he’d help build men.

In his subsequent now annual trips Laine began focusing on bettering the boys lives; he brought in Ugandans to teach them about business, goal setting, team sports, farming and various trades they could achieve. Laine took them on field trips to see other places, people, tech schools and colleges, showing them options they wouldn’t know isolated at the orphanage or on the farm.

Now some make sandals, are farming, and in one success story one boy over the years built his own house, has a small farm with a pig – a prized and valuable possession - and now at age 19 owns a small store.

Laine ended by showing us a news video covering how he helped bring one of the boys, crippled with burnt legs, to Los Angeles for treatment so he could walk. Laine enlisted the help of his family and others to make it possible. After 6 months of surgeries, the boy is back in Uganda walking, even running and playing sports.

Laine left with us with what he has learned most from this entire experience; that each of us needs to be loved and recognized for who we are, we each have worth, and our own story is unique and important.