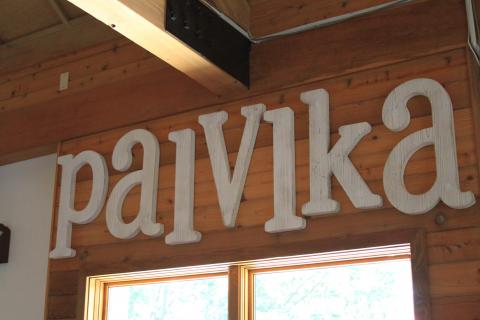 Only steps beyond Gliders Launch, the point just above Crestline at which thrill seekers leap off the side of the mountain and gently hang glide to the valley floor, is a community of campers who are no less brave and eager to experience the wonder of life than the hang gliders. Camp Paivika has been serving special needs children and adults since 1947. Offering a clean, safe, and fun environment, the beautiful camp provides life enriching, moments of joy to campers and a respite to families and caregivers of these unique people.

With the support of Lawrence Frank, founder of Lawry’s restaurants, the dream of Camp Paivika became real. Today, the Frank family continues to support this effort as does the Forest Lawn Foundation. Through such relationships, the Rotary Club of Los Angeles began its long friendship with the camp.

On Saturday, July 21, twenty Rotarians and family members continued the tradition of visiting and serving the camp. In the recent past, LA5ers would roll up their sleeves and clean, paint, and make minor repairs at the facility. This year, it was all about fun. At the invitation of Ability First executive and LA5 Rotarian, Adam Pilder, Rotarians gathered to lend a hand at the annual camp carnival. Bob Aldrich and his wife, Alicia Aldrich made and served snow cones and officiated with Joe Grant at the Chuckin’ Chicken event, while President Weiss donned a purple robe and read palms and told stories to wide-eyed children. J. T. Warring helped contestants fish for prizes, Josh Mandel and his family painted faces, and Vien Le chased errant ping-pong balls that were flying everywhere.

After two hours of great fun, the campers and staff retreated to their lunch and the volunteers gathered for a lunch provided by Lawry’s and served by Todd Johnson, Paul Ekstrand, and Rick Gibson. Camp Director, Kelly Kunsek shared inspiring stories about the Camp and its history of service. LA5ers enjoyed learning about the Club’s long history with the camp and felt drawn to be a part of its future.

As Kelly Kunsek told her stories, it was clear that the special people served by Ability First were not to be underestimated. They were eager to engage and enjoy life their way. To that end, Kunsek announced that the next addition to the Camp would be a remarkably engineered zipline where people of varying physical abilities can experience the thrill of the zipline. Apparently the thrill seekers at Gliders Launch have nothing on the campers at Camp Paivika.
​