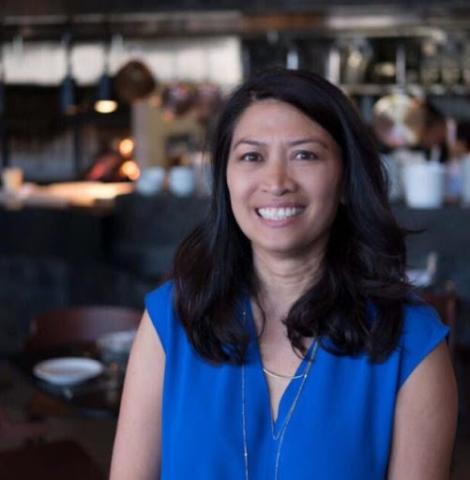 Dina Samson adeptly assumed the role of “unexpected restaurateur” when she opened her first restaurant, Sotto, alongside husband/chef Steve Samson, in 2011. Since then, she has become the visionary and operational glue for their two current concepts, Rossoblu and Superfine Pizza. Both fall under the banner of the newly formed San Julian Hospitality Group.

Before joining the restaurant industry, Dina developed her business acumen by spending years in the financial world in investment banking, private equity, and hedge fund operations in San Francisco and New York. She has also served in Chief of Staff roles to several financial CEOs, as well as celebrity entrepreneurs P. Diddy and MTV’s Rob Dyrdek. She originally moved to Los Angeles to produce video games for Brash Entertainment/Wall Street Games.

True to their hospitality group’s core values of community and compassion, Dina has co-founded the Independent Hospitality Coalition and RE: Her. Both organizations focus on fostering and uplifting the Los Angeles restaurant community. She has also co-founded the charitable organizations Rossoblu Restaurant Relief Fund, Feeling Superfine Program, and FeedLoveLA, which all focus on addressing food insecurity issues in her community. Samson is both a James Beard Foundation Women’s Entrepreneurial Leadership Fellow and a C200 WinLab Fellow. She also miraculously finds time to raise her young twins.