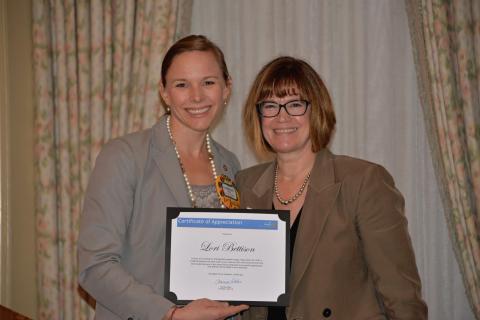 What is bigger than the biggest dinosaur relic, travels all over the Los Angeles region and has an audience of 1.3 million?  It is the one and only Natural History Museum (NHM) of Los Angeles County, frankly a community treasure!

On March 23, LA5 was privileged to hear from Dr. Lori Bettison, President and CEO of NHM, ably introduced by LA5 member Charlene Dimas-Peinado.  Dr Bettison, recounting that the museum opened in 1913 in Exposition Park, and while the oldest museum in Los Angeles, is looking ahead. She presented the key points of the recently developed strategic plan designed to help ensure a successful future for the institution.

Among those goals are for NHM to expand its role being of, for, and L A County residents and visitors by continuing to provide affordable access to all students and the general public. The plan also specifies expanding its interdisciplinary approach for understanding and connecting to urban nature, embodied in the new Urban Garden on its grounds and with the Urban Nature Research Center developed two years ago.

The Museum is working to bring more of its vast collection on view to more people both on-site and through mobile museums at schools and community centers.  The edifice is also being expanded to add an auditorium and interdisciplinary center on Los Angeles history.  The Museum wants to grow along with Exposition Park, where the iconic Lucas Museum of Narrative Art is under construction and the MLS soccer stadium recently opened.

I was so motivated by Dr. Bettison’s presentation I went to the Museum the following weekend.  I had visited before but not for quite a while, and was awed by its magnificence and by the sheer range of exhibitions and topics covered, from the pre-historic to the current and beyond!

As Angelinos we are lucky to have such a place in our community and as a club to have welcomed Dr. Bettison as our speaker.