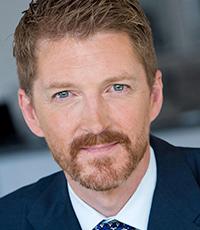 Erick Weiss is that Rotarian often seen behind the lights and cameras when a big event is being held. He is a producer, much like a point guard on the basketball court.  All the other participants connect by going through him. He makes it all happen.

A native of Syracuse, New York he has been both behind and in front of the cameras for a long time. He earned a BFA in Acting and Directing from Syracuse University, and a MA in Theatre History from the University of Toronto Graduate Center for the Study of Drama. At one point in his career he co-starred in a film by Percy Adlon (famous for Baghdad Café) called Younger and Younger with Donald Sutherland, Lolita Davidovich, Brendan Fraser and Helen Hunt.

Erick is not just a man with numerous talents, but also one with many hobbies. Those include music (guitar, violin, recorder), hiking, boating, sailing, skiing and listening to NPR. He enjoys reading, and his two best books so far this year have been The Collected Stories of Lydia Davis and The Circle by Dave Eggers.

Erick has also been very involved in Rotary. He served as Sergeant-At-Arms and also on the LA5 Board of Directors. His memorable moments involved the send off for Gerry and Kathy Turner—for all they gave to so many people—and the way LA5 surrounds its members who are facing medical and personal struggles. He would invite the following to his Fantasy Meal: Thomas Jefferson, Shakespeare, Hiawatha, Patti Smith, John Lennon, Eartha Kitt, Samuel Beckett, Sandra Day O’Connor, Cleopatra & Barack Obama. Can you imagine being a waiter for that table!

He has seen the huge difference Rotary makes, not just in Los Angeles but also throughout the world. Even on an assignment in New York, he made connections with Rotarians on the east coast. Erick has learned that being a Rotarian means you are never really alone no matter where you travel.

Beyond the professional and Rotary worlds, Erick is also a loving father. He and his wife Alicia have twin daughters, adopted from China, who are named Alice Mimi and Margaret Tiantian. The director of the orphanage in China gave the girls their middle names. The words Mimi and Tiantian in Chinese mean “honey” and “sweet” respectively. That is why he named his company Honeysweet Productions.

If you haven’t met Erick introduce yourself this Friday. He is an accomplished professional, a committed Rotarian, a loving husband and an awesome Daddy.