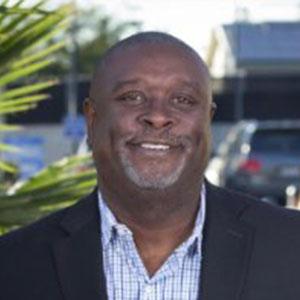 Corey Dantzler joined LA5 in 2011, but pressures of his work prevented him from being as active as he desired. So, last Friday when he led us in The Pledge of Allegiance, he renewed his commitment to serve actively within the Rotary Club of Los Angeles. This reporter thinks that worthy of an article, which is why Corey is the focus of our attention this week.

Corey grew up in South Los Angeles and served his country in the United States Air Force. He played basketball at Marshall High School and is married to Charmaine, who won his heart many years prior when they were in school together. They are the proud parents of three boys, ages 19, 13 and 9.

Corey has been the President/CEO of the Challengers Boys & Girls Club since 2006. He took over that position from his father, who founded the organization in 1968 and who led it for thirty-eight years.

In the summer of 1968 Corey’s dad, Lou, came home one afternoon and found his neighbor’s eleven-year-old son breaking into the Dantzler residence. Angry, but not surprised, Mr. Dantzler understood how life was for young boys growing up without a father’s presence. Lou lost his own dad when he was seven. Rather than calling the police Mr. Dantzler listened and gave the boy his attention. He invited the youngster and eleven of the other kids in the neighborhood to spend a day with him at a local park; a place they had never visited. The next week the group increased to twenty-five, and after much hard work and strong community involvement, the Challengers Boys & Girls Club was formed. It is often called the Oasis of South Central Los Angeles, and since 1968 over 35,000 boys and girls have participated and found life at a much deeper level of fulfillment than they ever dreamed.