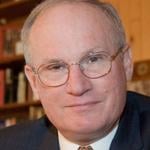 John Schmid was born in Pasadena, and currently lives less than 2 miles from his birthplace. He has been a member of LA5 for 19 years, and remains active on many levels. In addition to networking opportunities, he enjoys the many friendships created over almost two decades of Rotary involvement.

John is President of Summit Business Brokers, Inc. As a licensed broker he facilitates the sale of medium sized, privately owned companies valued between $1–10 Million. He earned both his B.A. in liberal arts and his MBA from USC.

John was in the Marine Corps four years, serving our nation in Vietnam. He and his wife, Susan, will celebrate their 20th wedding anniversary in October. He is currently reading S.C. Gwynne’s, Rebel Yell: The Violence, Passion, and Redemption of Stonewall Jackson. One of his favorite restaurants is Clancy’s in Glendale.

John has served on at least three LA5 committees: Hiking, Scholarship and Ability First. Along with Past President Don Robinson, John hiked rim-to-rim-to-rim at the Grand Canyon in just two days. That was no small accomplishment!

John is currently on the committee putting together a 108-year history of the Rotary Club of Los Angeles. It should be ready for purchase by mid summer, and on Friday February 13, a club picture will be made for inclusion in that volume. Make sure you are present on that important date.

Last March, John and Susan visited four capital cities in the European Union: Budapest, Prague, Vienna and Bratislava, all within the scope of six days. John has also traveled to India, where he saw first hand the Taj Mahal. He would invite Lewis & Clark, and Neil Armstrong to his fantasy meal.

One of John’s most memorable Rotary moments involves his friendship with the late Randy Lee. On four occasions, John joined Randy on the famous LA5 Rotary fishing trip. Randy’s wife, Rita Lee, will be our featured Rotarian next week.

Make it a point to say hello to John the next time you see him at Rotary.