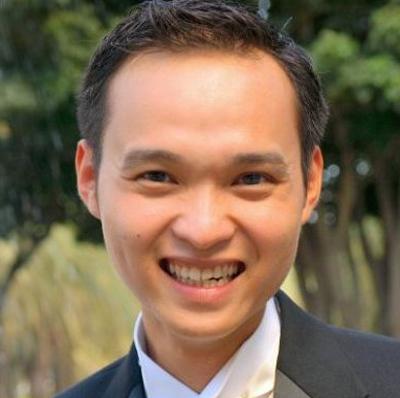 Tuan Do has been a loyal and active member of LA5 since 2011.  His high energy and great interpersonal skills have endeared him to many Rotarians, especially to this reporter.

Born and reared in Vietnam, he eventually married his childhood sweetheart with whom he attended high school in Saigon.  After graduation they went their separate ways.  Chuyen moved with her family to Fairfax, VA, where she graduated from George Mason University with a degree in Computer Science.

One year after Chuyen moved to the east coast, Tuan moved to the west coast.  He graduated from California State University Long Beach, also with a degree in Computer Science.  Eventually the two got re-connected through friends and Facebook, and were married in 2007.

For a while they worked together at Zealyx, Inc. where Tuan is President.  Eventually Chuyen took a position as the IT Manager for Nationwide Insurance.

Tuan and Chuyen enjoy eating out on the weekends, and his favorite non-Vietnamese food is crepes.  He is reading Warren Buffett’s The Snowball and labels himself a news junkie.  In the past Tuan played racquetball, but that all changed in 2012 when a son, William, joined the family.  Today Tuan and Chuyen’s life revolves around their handsome young son.  Check out the family Facebook page and see for yourself.

Tuan joined Rotary for business networking, fellowship and to give back to the community.  One of the best memories in LA5 to Tuan and Chuyen was working as volunteers at the AbilityFirst Bowling Party.  Tuan has a special needs older sister, which makes outreach through Ability First a high priority for him.

It seems like Tuan’s high energy and sharp business savvy will be carried on through his young son, William. Tuan said, My son has a “Will Do” attitude!