From Wasteland to Renaissance 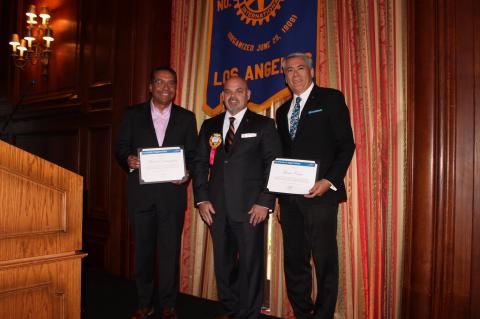 There was a time when there was nothing downtown. After finishing business, most people would go their separate ways back home. Javier Cano recalls this distant memory before presenting the city of today.  Now sixty thousand people now live in downtown Los Angeles alongside the residents of hotels.

Los Angeles like other big cities is known for its signature character; Javier Cano believes that convention centers and hospitality is the heartbeat of Los Angeles. When the city was nothing but a place of business, Javier grew his fledging hospitality business and the local economy by creating more rooms for people to live in and to hold meetings and events. With surge of rooms and restaurants, Los Angeles downtown added plazas, museums, and recently the Broad.

What is the situation of today?

Javier Cano gives us the first hand details of the boom in the hospitality industry. Hotel rooms are flying out to leisure travelers and to business groups for conventions to the point where demand is growing faster than the skyrocketing supply. Alongside this boom, the local economy is flourishing and more stores and places are being added on.

Javier doesn’t want to make the same mistake America made many of the years before 2012, when America neglected advertising tourism; Compared to the rest of the world, America fell behind in tourism and left a lot of money on the table.

Javier says the solution is simple. To meet the growing demand and shrinking space in Los Angeles, Javier knows that the city needs to promote downtown on an international level. Construction is strewn all over the place in Los Angeles. If the city planners can set down a urban vision for hospitality, this growth in hospitality and tourism will continue as more rooms will open up to wealthy tourists and space would be used more efficiently.

Michael Dominguez drills the point down that the hospitality industry is not only growing in America but also growing in Africa and South America. He makes a careful distinction between the two continents, confirming that South America’s hospitality industry grows with big events like the World Cup and shrinks after its conclusion. Africa on the other hand will continue to skyrocket and will keep its pace for the next five to ten years.

North Africa is down from a really strong position. South Africa is huge and the amount of investors pouring money into it is innumerable. Although North Africa suffers due to their proximity to ISIS, data shows the Africa had its strongest growth period last year and is projected to flourish within the coming decade.  Middle east tourism is down due to ISIS and countries like Jordan has its tourism industry suffer even though terrorism is happening around it.

Michael brings the discussion back home to talk more about the hospitality situation in America. He confirms that the industry is reaching new heights as the supply, the rooms sold, the revenue earned is skyrocketing past old figures. In 2006, we had 83 million hotel rooms and in 2009, we lost 13 million. Today, we surpassed 83 million and are building new rooms at the rate of 2 million per year.

Michael offers a deeper insight on the segments using the new rooms. Continuing on Javier’s point about the convention market, Michael confirms that not all money spent on hotels are equal. Although the group/convention business is flourishing, transient and non-group segments are leaving them in the dust. Javier owes it to the older Millennials, adults of ages 28 to 34, because they marry later and travel more than any other group. Research shows that Millennials with careers travel 2.5 times more than other generations.

Javier and Michael has shown through charts and data that the only direction hospitality is up. Los Angeles owes it to these two men for bringing in business and profit to downtown.