How Rotary Can Build Sustainable Peace for All 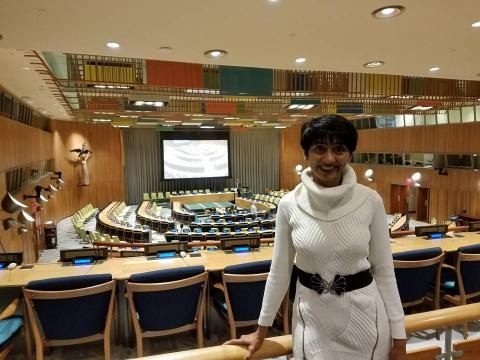 Today’s world presents us with opportunities and challenges never before seen. The United Nations General Assembly (UNGA) gathers together to address some of these issues. And this past January, one of our LA5 boardmembers, Manisha Javeri, Ph.D., participated in the United Nations General Assembly high level dialogue on “Building Sustainable Peace for All: Synergies between 2030 Agenda and Sustainable Development for Sustainable Peace”.

At the General Assembly, U.N. Secretary General Guterres stated the main focus of this year’s assembly: Creating inclusive societies, comprehensive collaboration, human rights, sustainable energy, clean water and environment, education, understanding conflict, and educating girls for gender equality is all investing in sustainable peace. Attending the UNGA workshop on "Empowering women and youth for peace and sustainable development”, Manisha overheard the following from one of the presenters, “Development without peace, without participation of women and youth is like building a skyscraper on a fault line.”

As Rotary International (RI) calls its members “People of Action”, this focus on mothers and children in the U.N. directly aligns with RI’s cause of saving mothers and children. As Manisha states, “Ultimately, it all boils down to education. If every individual is empowered, they will play a vital role in peace and sustainability in their own lives and in their community. Gender equality will evolve through education and respect for human rights will evolve through education.”

Manisha feels that one of the areas in which Rotary can improve on its humanitarian work is to create a system/policy to quantify and measure the impact of it work through the Global Grants.

Actively working in the area of Peace and Conflict Resolution is not unfamiliar territory for Manisha. She is a Professor at California State University, Los Angeles and is currently the Peace Chair for the Rotary District 5280. In her role as a Peace Chair and as a faculty, she has been actively involved in the post war reconstruction and redevelopment efforts in Mozambique since 2007. She has used her classroom as a lab to design, develop and implement technology based interventions in Mozambique to alleviate the health and poverty related problems in the HIV/AIDS afflicted community in Maputo. In addition, Manisha has implemented solar cookers, micro financing and micro business for women and HIV/AIDS educational training program for the youth in Mozambique. Previously, Manisha was a Rotary Peace fellow and is currently an ambassador for the Global Peace Index where I she using the data to inform decisions made for promoting Positive Peace.

As Adam Weiss paraphrased Rotary International Director 2015-2017 Brad Howard on Facebook, “Rotarians cured Polio in their spare time”, it seems Manisha will be creating greater opportunities for peace and understanding in hers. Along with her “day job”, Manisha is also an Educational Technology Consultant for the Global Campaign on “womenseriously”. In 2015, 15 years after the United Nations Security Council Resolution 1325 on Women, and Peace and Security was passed, only 46 out of 193 countries have National Action Plans (NAP), or roughly 24 per cent, not even one-fourth of the total. This campaign is to mobilize hundreds of thousands of women and youth as change agents at different levels and different generations within countries and internationally. She has been responsible for all the technology based interventions for this campaign, e.g. using social media, organizing globally virtual women’s peace tables and using technology to mobilize women and give them a platform to voice the issues they face in their countries.