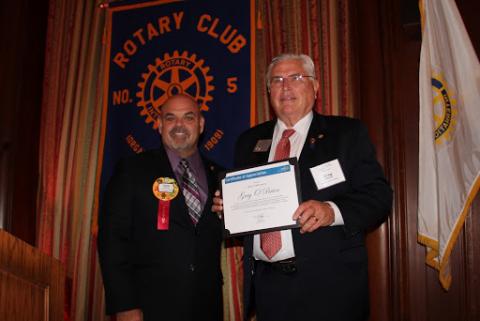 Think of a black mouse... with a pair of white gloves... dressed in red shorts with two buttons. This well dressed rodent is Mickey Mouse, a character imagined by Walt Disney in 1928. We all know the power that comes the Mickey Mouse, or rather from the figment of Disney’s imagination.

Imagination. A phenomenon that  slips away from us as we wade into adulthood and face reality. At the District Assembly, District Governor O’Brien discredits this notion by telling us to go against the stream by imagining dreams once again. He backs up his call to “Imagine Rotary” with his stunning story of two of our most famous Rotarians: Walt Disney and Paul Harris. All things, even the U.N., began with a little imagination.

District Governor O’Brien has championed his “Imagine Rotary” movement by spreading the good news that is Rotarian Herb Taylor. O’Brien starts from the roots to fruits of Herb Taylor’s legacy, re-living the imagination that was dreamt and acted upon in 1932.

During the height of the Great Depression, Taylor was the president of Jewel Tea, a home delivery service of drinks and products. His management of the company beat the depression and outright thrived, eventually, closing its doors in 1981.

While Jewel Tea was staying afloat during the Depression, Club Aluminum of Chicago was in dire straits due to its massive debt. Club Aluminum networked and learned of Jewel Tea and Herb’s excellent management and leadership skills. They offered Herb a job as president with an 80 percent cut in pay. Herb took the challenge with a running start as he quickly implemented a company-wide cultural revolution.

Herb was a religious man. He knew Club Aluminum, which manufactured pots and pans, had to rebrand itself to beat the competition. He knew that with the power of prayer, he could imagine something glorious, a vision that could turn the tide against the crushing blow of the Great Depression. He wrote out a 100 word paragraph to illustrate the culture for the company, which he eventually reduced it to a “Seven Way Test.” . He imagined that his company will profit by being honest about its products, playing fair with its dealers and employees, promoting goodwill, and championing ethical, mutually beneficially approach to everyone involved.

As recalled by District Governor O’Brien, “He showed the test to his four department managers:  A Roman Catholic, an orthodox Jew, a Christian Scientist and a Presbyterian.  All agreed that the test was consistent with the tenets of their own faith.” Facing tough choices around contract fulfillments, things slowly began to turn around. Herb and his company stood behind their products, paid their vendors on time and treated their employees like family.

By 1937, Club Aluminum turned the corner and started paying its shareholders dividends at a time the stock market was in shambles. This is when Rotary took notice. Deciding that every company should be run like Club Aluminum, Rotary adopted Herb’s 4-Way Test as a model for Vocational Service, even reducing it to a one-way test: “Building goodwill and better friendships”.

As District Governor O'Brien said, “We have credibility.  We are not there to sell, convert or propagandize.  We are there purely to serve. Rotarians all speak the same language.  We speak “Rotarian”. When Rotarians gather, we talk about the things that unite us and not divide us. Our club meetings are an oasis from the contentious issues that flood our daily news.”

In 2001, shortly after taking office, RI President Richard King received a phone call from the Secretary General of the United Nations. The World Trade Towers had been destroyed by terrorists and tensions were running high throughout the world. In some places in the world people were celebrating. Here there was anger, prejudice and even hatred. America was soon going to war.

As District Governor O’Brien recalls the story, RI President at the time Richard King asked “What can Rotary do to help?”

Rick King called Rotary leaders in Israel and the Palestinian occupied territories because he knew they would “speak Rotarian” by displaying a unity of purpose in constructing a humanitarian project.  They were united in service and dedicated to peace. And these Rotarians, of different faiths, beliefs, cultures and political convictions, were a gift to the world.

“At a time when the societies, included ours, are divided into camps, the world desperately needs more Rotarian,” stated District Governor O’Brien. “Building goodwill and better friendships within our families, neighborhoods, communities and the world is accomplished through the vehicle of service. The 4-Way Test inspires us. It exhorts us. It defines us. It is our mission.”

As District Governor O’Brien challenges us, “Imagine, as Rick King did, as Herb Taylor did, as Arch Klumph did, as Paul Harris did, doing something that lifts inspires and motivates your club, improves your community and leads others to imagine along with you. Imagine Rotary!”