Jan Perry﻿ -﻿Service Above Self Personified 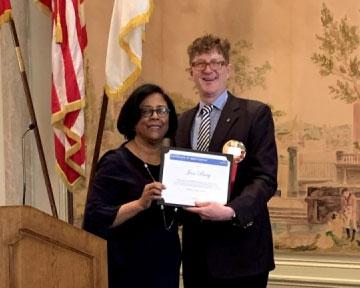 Jan Perry, our featured speaker on January 18 began by explaining that she looked at our LA5 website for background. She was struck by what she saw; that is, our commitment to solving local and global problems together in community, the values that have motivated her life.

Ms. Perry’s presentation focused on the personal, starting with her childhood in northeast Ohio.  She grew up in a middle-class family with her parents and siblings. Her father and his three brothers had all served with distinction in World War 2, yet all in the Army’s then segregated units. They were proud of their service and their patriotism. One uncle was decorated as a member of the Buffalo Soldiers. They had served in Italy and while there were appreciated and considered heroes by the Italian people for their efforts to liberate the county, in stark contrast to the daily discrimination they faced at home. She recalled that when they returned to Italy and Jan was a child, a local woman in Luca came up to her uncle and said her child would not be alive now if it wasn’t for him, which greatly impressed her then!

While her father, uncles and her mother had to cope with life in the U.S. it was also the time for activism and therefor hope. They were moved by Dr. Martin Luther King to take action. Her parents joined the March on Washington in August 1963.  Jan mentioned a letter her mother had written to her about a momentous experience on the bus on the way to the march that inspired in her mother a sense optimism as people, black and white, uniting for good, that moves Jan to this day.  In Ohio, her parents were community activists with her father serving as the town mayor.  She thought all families sat around their dinner tables discussing water bonds, sanitation and municipal issues.  But those family gatherings impelled Jan to get involved when she came to Los Angeles to attend USC.

By the mid 1990’s, Jan was serving as 9th district council deputy, soon rising to chief of staff, and in 2001 elected 9th district councilmember. She served 12 years and as President Pro Tempore, at one time the only female on the 15 member council. She was re-elected in 2005 and 2009, leaving office in 2013 as a candidate for Mayor.

On city council Ms. Perry claimed passing a water bond as her proudest achievement, facilitating the development of two wetland preserves in South Los Angles. They not only capture water but serve as nature and educational centers for the communities served.

She also provided financial aid and zoning critical support on behalf of the    L A Live entertainment project, and on behalf of Skid Row coordinated with area nonprofits for public and private financing, spurring 1,200 new units of badly needed permanent housing with counseling and medical services in Skid Row, as well as 5,000 units of low-income housing in other parts of her district.

Given her impact, visibility, and accomplishments of these and many other efforts, in 2013 Mayor Garcetti appointed Ms. Perry as General Manager to lead the revamped Economic & Workforce Development Dept. (EWDD). In her 5 years there she worked to leverage City real estate assets into development projects, creating jobs and revitalizing struggling areas.

Now Ms. Perry has opened a new chapter.  She is Executive Director of the Infrastructure Funding Alliance, a statewide organization dedicated to developing and advocating strategies to implement environmentally and fiscally sustainable infrastructure projects. And she just declared her candidacy as County Supervisor for the 2nd District this year vying for the term-limited seat.

To open her remarks Ms. Perry quoted legendary Congresswoman Barbara Jordan by saying, “It Is a privilege to serve people, a privilege that must be earned, and once earned there is an obligation to do something good with it.”