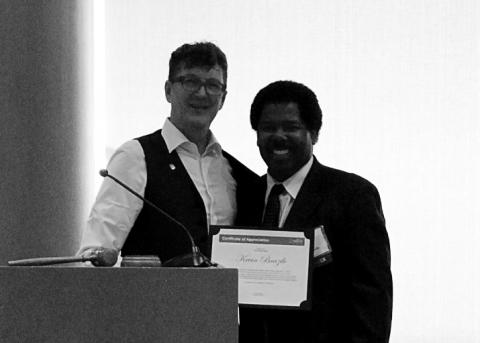 Here at Rotary 5, we are privileged to hear many distinguished speakers, but on Friday September 7th, we heard from a true pathfinder. Judge Kevin Brazile. He now serves as the first African-American Assistant Presiding Judge of the Los Angeles County Superior Court system and will soon hold the prestigious position of Presiding Judge, again as the first African-American to do so.

To start the event, President Erick set the tone with a rousing rendition of This Land is Your Land to which all in attendance sang in full voice!

Judge Brazile was born and grew up in the Los Angeles/Culver City area in a low income but closely knit family. His parents and especially his mother, who was a “prayer warrior,” instilled in him a confidence and a drive to achieve his goals, despite, he noted, having the lowest GPA at Culver City high school.

He was the first in his family to attend college, graduating UCLA as well as attending law school there. He began his career in the County Counsel office as one of the few African-American attorneys there at the time, working on cases of excessive force by the Sheriff’s Department. Mr. Brazile rose through the ranks to become Division Chief where he gained valuable management experience, which he has put to good use as Assistant Presiding Judge. As a Superior Court judge his values were fairness and access to all defendants, and to give everyone their rightful “day in court.”

To become Presiding Judge he had to campaign. He traveled the length and breadth of Los Angeles County, visiting all 38 Superior Courthouses from Lancaster to Long Beach to hear and speak with the judges who would be voting. He spent that time not only introducing himself but listening to what judges and others needed and wanted for them to do a better job. His takeaways were the importance of communication, especially when it came to listening, transparency in processes and decisions, and in instilling confidence in others about himself to do the job and to care about colleagues.