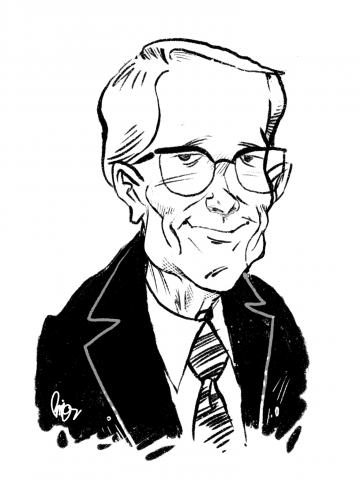 The affable demeanor, the thoughtful way he listens, the wry smile signifying that whatever is coming will be delightful, the pause before a reply, the deferential respect given to everyone, the kindness, the clarity and the wisdom are just a few of the characteristics of a true gem at Rotary LA5; our new volunteer Executive Director, John Green.

John was born in San Francisco in 1945. His father had been an executive with Macy’s in NY and then served in WWII as a Naval Aviator flying PBY anti-submarine planes. When his squadron was in Iceland none other than Winston Churchill made a deliberate stop at their post to thank them personally for a job well done. During his time serving he proposed to John’s mother by mail. She accepted and he flew back for the wedding in Lake Tahoe. Still serving in the war effort, about nine months later John’s father, Jud, had landed on some remote island and another soldier passed by and said, “Are you Jud Green?” “Yes I am,” he answered. “Well, your wife just had a baby.” Jud wanted to know if it was boy or girl of course… but the man didn’t know… It took Jud a few days to get back to meet his new son John.

After the war Jud and his family settled in the West eventually landing in San Mateo opening up “Jud Green’s” a women’s fashion store that he and his wife ran successfully. John grew up in San Mateo.

John was registered for the draft as he attended Stanford University however, at that time, though he was willing to serve if called upon, he was not in favor of the Vietnam war and he told me that he was one of two people in his fraternity, Phi Kappa Sigma, who wore a black armband on Fridays which is how the Stanford students showed their opposition to the war. It is worth noting that John’s opinion about that war has evolved as he grew to understand the complexities that took America into that situation and he has enormous respect for all the good people, including many Rotarians, who served in Vietnam.

Upon graduating Stanford, John got a deferment from the draft but enlisted in the Peace Corps and served three years in Thailand. Here he learned the language and he now speaks very fondly of his time in the Peace Corps. Normal assignments are two years but John liked his work there so much that he asked for and received a third year appointment. He was also very curious about Vietnam and during his service in Thailand he travelled to Vietnam to see the country himself.

When he returned to the US he attended Santa Clara Law School. He remained willing to serve but his draft number was never called. Upon receiving his Law Degree, John thought he wanted to work in a smaller town and was thinking Bakersfield or Fresno. But he had an opportunity to apply for a job as a prosecutor with Los Angeles. He took the interview all the while thinking he’d never move to that horrendous city down south as all San Franciscan’s think. So he was super relaxed and had a great interview. The irony was that he blew all his small town interviews due to his anxiety but it didn’t matter because LA offered him the job.

So John Green held his nose and moved to Los Angeles. He worked as a Prosecutor and Deputy District Attorney prosecuting more than fifty jury trials including serious felony offenses. He then had his own practice for some six years attending to the needs of the LA Thai community (over 40,000 residents then) and eventually he moved on to Musick, Peeler & Garrett handling civil litigation.

And this is where John’s LA5 story really begins. A memo was getting passed around the offices talking about LA5 Rotary and John thought that would be a good idea. His father had been a Rotarian. But it turned out LA5 (more than 500 strong at the time) was only looking for partners. John decided that he didn’t need to join Rotary just then and next moved on to a role as in-house Counsel for State Farm before being appointed to the LA Superior Court where he served for 16 years.

He met his wife at a party in 1980 where a friend of his was trying to connect her with another guy. But John was smitten the moment he met her. It didn’t take long for their courtship to result in marriage. She was an executive with Bullock’s at the time. Their eldest son is currently serving as a diplomat. Their daughter is making the most of her philosophy degree working in London, England in computer software sales for a large American company. John and his wife still live in the house they purchased when they first got married.

In 2008 John was approached by a friend about LA5 and he took the opportunity to become a member. Don Robinson was his first President. John says he joined with selfish “with a capital S” reasons. He wanted to meet people outside the judiciary. He wanted to hear good speakers. He didn’t want to do any work or particularly contribute at that time.

However, believe it or not, the Gateway program was (even then) being run by Past President Ken Chong. And Ken said to the group, “If you don’t get involved in this club you’re going to come back in six months or a year and you’re just going to walk into a room of a hundred people and it’s just going to be a hundred people you don’t know and it’s not going to be a very rich experience for you.” John also didn’t like having a green badge. So he got on the Scholarship Committee because he had heard that it didn’t involve a big time commitment. He was “stunned.” He told me, “I felt that this was just going to be fairly mediocre people that really needed a break and we were going to help them. But I was stunned at how qualified they were. These were really remarkable kids who really deserved the scholarships and they belonged in the schools they were getting into with or without affirmative action or anything else. So that was a very exciting thing for me.”

Within a few years Past President Gerry Turner appointed John to a vacancy on the board and that is when he really got to know what LA5 and Rotary is all about.

I have had the pleasure of having John on my board this year and also as my appointment to the Executive Committee. He has been a truly outstanding influence on all of us and we have all learned to cherish his thoughtfulness. Thinking back to when he first learned about LA5 as a lawyer with Musick, Peeler & Garrett, and even to when he actually joined in 2008 John says, “We are now a more diverse club, a club with a greater variety of people in many different ways.”

We are all truly honored to have John Green volunteer, as an active member, to serve as our Executive Director.

Click below to listen to John say “Be the Inspiration” in Thai!​