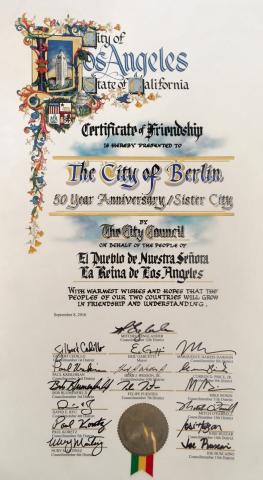 Los Angeles Rotary Club, LA5, the 5th oldest Rotary Club in the world, sends a delegation to Berlin to kick off 50 year anniversary as sister city.  Bearing celebratory proclamations from Mayor Garcetti and the entire LA City Council the LA5 delegation will be hosted by Berlin’s Mayor and also meet with the U. S. Consul General to Germany.   LA5 will be hosted by Berlin Rotary, the second oldest Rotary Club in Germany who is also the sister club to LA5.  Among the events LA5 will participate in are an honorary dinner for renowned film maker Wim Wenders and an exhibition by by LA artist Kitty Keck  (travelling with LA5) in the famed Palace Hotel.

Mayor Garcetti has endorsed the visit saying, “LA5 represents the best of Los Angeles in leadership and service.  Their 108 year history of good works in our city makes them the perfect organization to kick off our 50 year relationship as sister cities"