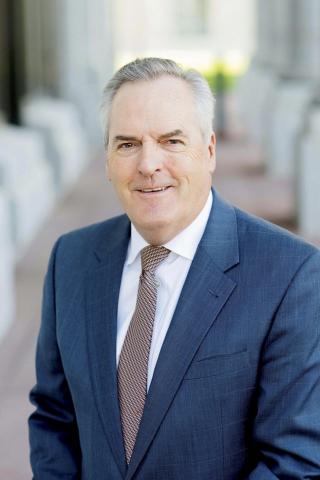 Val Hale was raised in Orem, Utah graduating from Orem High School. He attended BYU where he received his Bachelor's degree (Public Relations, 1981) and his Master's degree (Communications, 1987). He worked as a reporter (1981-82) and sports columnist (2005-06) and business columnist (2012-14) for the Provo Daily Herald. He later worked at BYU in marketing, fundraising, media relations and later as men's Athletic Director of BYU from 1999 to 2004. From 2002-04, he served on the NCAA Men’s Golf Committee and as chair of that committee in 2003-04. After he left BYU in 2004, he became Assistant Vice President of External Affairs at Utah Valley State College (now Utah Valley University) (UVU) until 2006.

He went on to serve at UVU as Vice President, Advancement (2006-10) and Vice President, University Relations (2010-12). From 2012-14, he served as President and CEO of the Utah Valley Chamber of Commerce. In August 2014, he was appointed as Executive Director, Governor’s Office of Economic Development. Hale is currently a Public Affairs Missionary for the Church of Jesus Christ Latter-day Saints.

Most recently, Hale has drawn from his many years of service to author “Living a Life That Matters: 7 Keys for Purposeful Living.” Hale and his wife Nancy are the proud parents of three married children and thirteen grandchildren. In his free time, he and his wife enjoy hiking, biking, golfing, snowshoeing, and spending time with their extended family. Any spare time for Hale goes towards his love of designing and creating intricate and unique wooden boxes, as well as other woodworking projects and miscellaneous jobs and ventures around the house and yard.