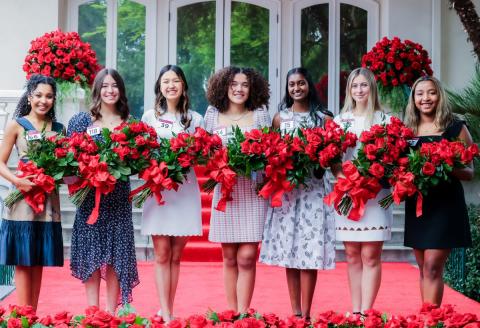 A LITTLE BACKGROUND ON THE COURT

Hallie Woods, the first Rose Queen, was named in 1905, selected by her classmates at Pasadena High School. All 16 of the also-rans rode with her in the parade. In 1906, Queen Elsie Armitage had 24 princesses — the largest Royal Court in Tournament of Roses history

Things have changed greatly since 1905. Today each September, some 1,000 young women between the ages of 17 to 21 interview for the honor of serving as a member of the Tournament of Roses Royal Court. The Pasadena Tournament of Roses administers a selection process to determine which greater Pasadena-area young women will have the honor of being crowned Queen of the Tournament of Roses, or more commonly known as "Rose Queen." In addition to one Rose Queen, six Rose Princesses will also be selected to make up the Royal Court. To be eligible for the Royal Court, applicants must be a female resident of the Pasadena City College district, be currently enrolled as a 12th grade senior in high school or as a full-time college student (minimum 12 units) in any accredited school or college in the Pasadena City College district, possess at least a 2.0 grade point average in the current year and previous year's course work, and be at least 17 years of age by December 31 of the current year and not more than 21 years of age before January 5 of the next year. Each applicant also must never have been married or have had a marriage annulled, have no children, and must agree not to marry prior to January 5 of the next year.

The Royal Court will then ride on a specially-designed float in the Rose Parade, and become ambassadors of the Tournament of Roses, mainly during its duration and prelude. The Royal Court members will attend over one hundred events in the Southern California area and preside over the Rose Bowl Game. In celebration of their achievements, Royal Court members receive scholarship money, wardrobe, and other benefits. The crown, provided and exclusively created by Mikimoto. It is adorned with 600 cultured pearls and 6 carats (1,200 mg) of diamonds.