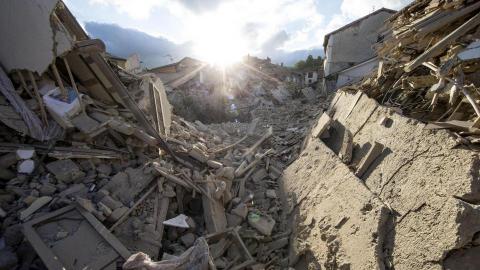 We watched in horror as we saw the first images of the 6.2-magnitude earthquake that struck central Italy on August 24, killing an estimated 290 people and trapping an unknown number beneath rubble. Tremors were felt as far away as Rome, but the loss of life and human suffering were felt around the world. I am proud that Rotary International acted immediately to assist in the disaster relief effort. Rotary International announced its response in an August 24 press statement.

International disaster relief agency and Rotary International project partner, ShelterBox, are sending a response team from its headquarters in the United Kingdom to the remote mountainous area of Italy where the destruction is most severe. The response team arrived Friday, 26 August, to assess the area's needs.

Luca Della Volta, president of ShelterBox Italia, the affiliate organization in Genoa, will accompany the response team. Della Volta is working with the Rotary Club of Rieti in District 2080, the club closest to the earthquake-affected sites, and will meet with officials of the Italian Civil Protection Department, fire department, and Red Cross to coordinate efforts.

If families and individuals made homeless by the disaster need emergency shelter, ShelterBox will send tents and other equipment from its locations in Italy and other sites across Europe. Della Volta says the most urgent need is for tents and relief supplies for the hospital of Rieti, where most of the patients from the destroyed hospital in Amatrice were taken.

"I am truly heartbroken over what has happened," says Della Volta, charter president of the Rotary E-Club of 2042 Italia. "As Rotarians, we are always available to help people in need."

Rotary is the world’s largest volunteer peace organization with over 1.2 million members worldwide in over 200 countries. Over the years, Rotary has learned that partnerships are the best way to leverage Rotary’s resources. To learn how you can support one of Rotary’s great partnerships, follow ShelterBox on Twitter for the latest updates and visit ShelterBox online.