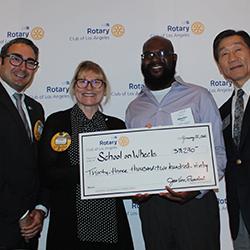 January 22, 2016 ­ LOS ANGELES, CA. - On Friday, January 22 the Rotary Club of Los Angeles (LA5) honored its commitment to combating and raising awareness of the growing problem of homelessness in Los Angeles by inviting five non­profit organizations to participate in the Fast5 Community Service Grant event at City Club Los Angeles from 11:00 A.M. to 1:30 P.M

Competing for a share of $64,500 in grants, Fast5 participants presented their unique approaches to addressing homelessness in Los Angeles to more than 100 friends, guests, and members of LA5. Rotarians then casted their votes for the organization they felt had the most promising approach. All organizations participating received some portion of the award with S​chools On Wheels​, the non­profit with the majority of votes, receiving a grant of $33,290.

School on Wheels’ Program director Matt Raab said, “We appreciate having the opportunity to be here today and everything that [LA5] does for the community. The grant will be used on a variety of education programs for homeless children and to help staff our volunteer tutoring programs, which is the main service provided to our students.” School on Wheels is the only organization in Greater Los Angeles exclusively dedicated to serving the educational needs of homeless children.

The full list of 2016 Fast5 Community Service Grants awarded is as follows:

LA5 president Jose Vera said, “This year, we decided to focus on the issue of homelessness in the Los Angeles area because it’s impacting our community right now. It’s visible and certainly has grown over the years. As one of the leaders in L.A.’s service community, LA5 decided to do something about it. We have focused our resources from our 300 members who have decided that we won’t stand by as veterans and children live on the streets.”

About the LA5: Rotary Club of Los Angeles