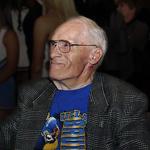 Steinar Tweiten was known to most members of LA5 Rotary as a distinguished gray-haired gentleman with an engaging disposition, who arrived each Friday on his motorized scooter.  But that was only part of Steinar’s existence.

His parents lost everything in the Great Depression, and his grandparents paid for his family to move from Oak Park, Illinois back to Oslo, Norway.  He was a guide at the 1952 Winter Olympics in Oslo, and met there a filmmaker who invited him to come to California, and who promised to get him a job.

Steinar was 20 years old when he arrived in California from war-torn Norway.  He was accepted as a junior at UCLA, but on probation due to his limited English.

He graduated from UCLA with a B.A. in Political Science, and within 10 days reported to the U.S. Army’s Fort Devens in Northern California, to satisfy his draft call. After basic training, he was assigned to the 7th Army in Germany as a linguist. Following his military service he went to work for Moore Business Forms, where he spent 34 years as a local supervisor - recruiting, hiring, training and managing many very bright recent college graduates.

Steinar spent decades in mountain rescue on the National Ski Patrol, and was part of the medical team at the 1984 Olympics.  He served as president of the Brentwood Rotary Club, and had a perfect attendance record in Rotary for 51 years.

Steinar often said he was proud to be an American, a Rotarian, a Bruin, a Veteran and to be of Norwegian heritage. Prior to his difficulty in walking, Steinar was a world traveler, a runner, tennis player, golfer, camper and skier who loved the outdoors.  He served on the Rotary International Convention Organizing Committee in Los Angeles, and was an active member of the LA5 Scholarship Committee.

Regarding his physical limitations, Steinar said, Disability turns to debility without great determination, dedication and lust for living.  He was an excellent example of Rotary’s motto, Service Above Self, and in expression of that, as a Rotary Club of Los Angeles Foundation Legacy Circle member -- donated 25% of his estate to the Rotary Club of Los Angeles Foundation.  Per his request, his body was returned to Norway for burial.  Rest in peace, dear brother.