The Demotion of a Rotary President 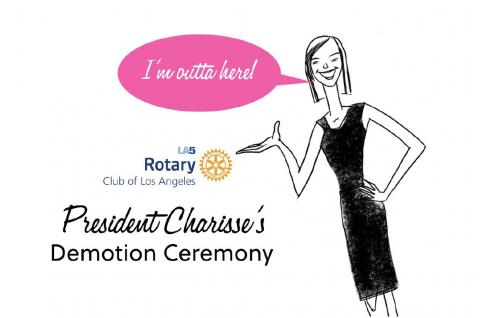 For a moment, it felt like a routine meeting. On June 22, as she has done for over 40 meetings, President Charisse Older took to the dais to call the meeting to order. She rang the bell that calls us together then glanced at her notes. When she raised her eyes from the paper she was greeted by a heartfelt standing ovation. And so began the demotion of the 109th president of the Rotary Club of Los Angeles.

President Charisse opened the meeting with a few remarks, first thanking the board that served alongside her and secondly the executive committee that made certain that her agenda for the year moved forward.

She highlighted several important accomplishments such as Angel City Celebration that served over 3000 children and their families; the Fast Five competition that awarded five non-profit organizations with over $60,000 in community grants; and finally the Scholarship Day program that awarded over $190,000 to high performing, college-bound, seniors from the LAUSD. She also noted that the Club had weathered some difficult moments during her year and she called upon the members to pull together to share Rotary in order to ensure LA5’s future as a preeminent service organization.

In a final touching moment at the end of the meeting she offered sincere thanks to close friends and family members, including her parents, who she said had supported her in extraordinary ways.

As customary, the Demotion Day program was not without its lighter moments. Rick Gibson offered a list of the Top Ten Things We’ll Miss About President Charisse, followed by a touching tribute from Megan O’Rourke, chair of the LA5 Foundation. Gateway Committee chair, Ken Chong, gathered several Gateway grads to offer the Gateway Salute.

In a twist, incoming President Erick Weiss could not attend the Demotion proceedings since he was traveling to Toronto to represent the Club at the Rotary International Conference. Weiss, however, had no intention of being fully absent from the meeting and so he prepared an original sing-a-long via video. (See video.) The video, that featured classic Erick Weiss corny jokes, did little to improve prospects for his acting career; but it certainly was a popular part of the demotion. Past President Alan Bernstein, who, as you may recall, required members to sing at all of his meetings, sang each verse gleefully.

A hint of dread appeared on Charisse’s face as the Past Presidents were invited to the front of the room for the President’s Scorecard. Thankfully, most Past Presidents resisted the temptation to speak at length about their own year as president and instead offered high praise to President Charisse. Past President Don Crocker remained at the podium to present Charisse with an original oil painting, one that she is certain to cherish for years to come.

The Demotion ended with a marvelous Presidential serenade performed brilliantly, a capella style, by Carol Shafer. The song “My Way” was customized to pay tribute to Charisse’s unique style of leadership. Finally, the Demotion Ceremony concluded with a toast offered in honor of Charisse by the man with a voice made for radio, Adam Weiss.