The Terry and Matt Show at Rotary! 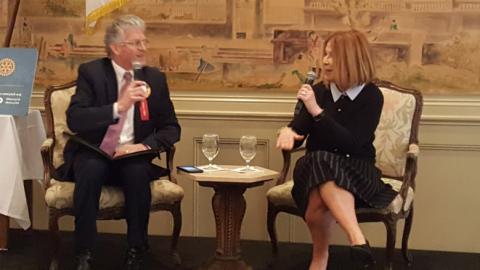 Rotary met on Friday March 22 at the California Club expecting a presentation from Terry Press, President of CBS Films. In that capacity she oversees creative, distribution, marketing and physical production for CBS Films including homegrown hits like “Last Vegas," "The DUFF," Academy Award®-nominated "Hell or High Water," and "Patriots Day," and for acquisitions like Cannes Grand Prix winner “Inside Llewyn Davis” and “Pride.” She’s also headed marketing for DreamWorks SKG, overseeing campaigns for all live-action and animated features, including “Saving Private Ryan,” “American Beauty,” “Gladiator” and “Shrek.”

LA 5 VP and Program Chair Matt Barr introduced Ms. Press then sat down next to her on the stage to candidly interview Ms. Press from wide-ranging topics related to the highly competitive media world.Among her many observations, Ms. Press said that sometimes what a filmmaker and the public want are two separate things but it is up to studio marketing to create a buzz. But if the film isn’t good, has the wrong talent – even big stars – the public may not view it.

She is known for her preparation reading many scripts and the news to be up on current events and how the film may relate to that. She is also a film historian and that knowledge informs her sense of the potential success – or failure – of a script and whether to recommend it be produced.

While working with DreamWorks as well as at CBS, she had many egos to contend with and learned that it was OK - and in fact part of her success - to say NO. That is, if she believed that something or someone wasn’t a good fit or would not be a success, she said so. Part of that includes the necessity that a film knows who it is for, that is a clearly identifiable audience. As well there needs to be talent that that audience wants to see, noting Denzel Washington has such star power, while in today’s Hollywood there is a dearth of young superstars.

She is also an accomplished writer (something not all producers can do well) andwrites many speeches for studio personnel. At the same time, she said she would not write her own script.

Finally, she discussed the role of new media such as streaming and the sheer number of new channels and formats. While theater going may be endangered, she asserted that movies still should be seen in large screen theaters.