The Tournament of Roses 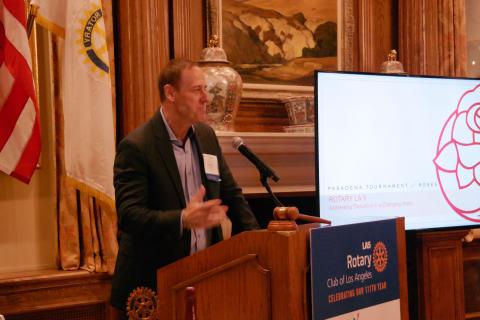 It’s the granddaddy of them all – The Tournament of Roses (TOR), staged for the world right here in usually sunny Southern California each January 1 (unless it’s a Sunday). On September 20, LA5 breakfast attendees heard from TOR CEO David Eads about some behind the scenes challenges the organization faces in keeping the event relevant and exciting to its millions of worldwide viewers of both the iconic parade and the vaunted Rose Bowl football game.

The first Tournament of Roses was held in 1890 sponsored by the Valley Hunt Club. The abundance of flowers in the midst of winter prompted the club to add a parade before the competition, where entrants decorated carriages with hundreds of colorful blooms. The Bowl game came a decade later in 1902, though not held annually due to football playoff schedules. Both the parade and bowl game are recognized as the gold standard by which others are measured.

Despite the TOR’s success and global recognition the organization faces challenges when producing a parade attracting 700,000 live spectators and a football game for 90,000 fans each and every year, and millions more worldwide via television. These events have a total economic impact on Pasadena and greater Los Angeles of nearly $200 million from visitor spending for hotels, restaurants, attending other paid venues, and other category spending while in the area, many who come for the tournament from out of town for one to two weeks.

A little known fact is that the parade revenue doesn’t cover its expenses and in the long run is not economically sustainable. Mr. Eads and the TOR Committee are exploring ways to have it break even. Another challenge he mentioned is security, a concern of both the organizers and spectators. The TOR has installed auto blockers, security cameras and more security staff along the parade route and at the game to mitigate potential problems, all at additional cost to TOR.

In terms of the Rose Bowl game, challenges include a declining football audience, changes in the NCCA’s playoff format and a proliferation of bowl games at the end of the year diluting the audience for each game. While the Rose Bowl continues to fill the stadium the TOR recognizes that may not always be the case and again, is working to identify ways to ensure a viable future for the game.

Any of us who have attended our annual TOR Rose Court luncheon, worked on a float with Rotary (myself included), attended the parade or the bowl game, or just watch the spectacle on TV know how much this event is integrated into the area’s New Year celebration. We wish CEO David Eads and the TOR all the best to keep this unique and iconic tradition as part of our collective Southern California experience.