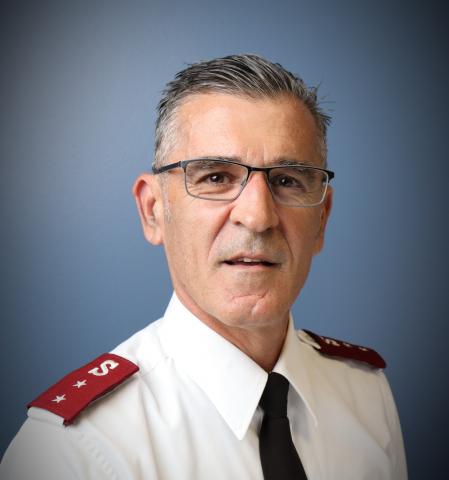 A little about Captain Sean.

Captain Sean was commissioned as a Salvation Army Officer in June of 2011. He and his wife Captain Bonita and their six children moved to the Coachella Valley, where they worked as Directors of Operations for the Davis Center Corps Community Center.

During this first appointment in the Palm Springs area, where they served for 5 years, they completed a $3.5 million dollar building project, which included a high school-sized gymnasium and large expansion of the Davis Center’s after-school tutoring program.

In 2016, Captain Sean was appointed to the El Cajon Corps in East San Diego, where he completed a 7.5-million-dollar capital campaign and opened a new 32,000 square foot Red Shield Community Center.

This summer, Captain Sean and his family moved to the LA region where he was appointed as the California South Division’s General Secretary and LA Metro Coordinator.

Captain Sean was raised in Southern California and moved to Anacortes, Washington as an adult, where he met his wife, Boni, who is a Northwest native. While in Anacortes, they owned a plumbing business, which was voted Best Plumbing Company for three years in a row in the local paper. In 2006, they both began helping with youth at the local Salvation Army Corps Community Center. After about three years they both felt called to full-time ministry.

Captain Sean’s passion for ministry brings joy to his life as he strives to serve “Others!” by meeting the spiritual, physical and human needs of his fellow citizens in the community where he serves.