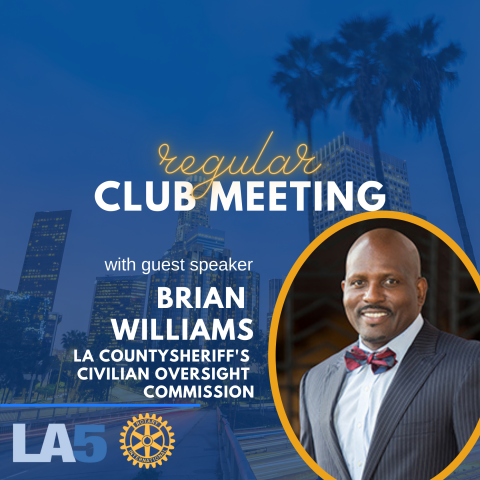 This meeting is sponsored by 3Shades Design

Brian K Williams. Esq., serves as the Executive Director of the Los Angeles County Sheriff’s Civilian Oversight Commission. This advisory Commission serves as a liaison between the community and the Sheriff’s department as well as provides policy and other recommendations concerning the department.  Williams also maintains a law practice, the Brian K. Williams Law Group.  Prior to his appointment as executive director of the Civilian Oversight Commission, Williams served as President and CEO of Junior Achievement of Southern California, one of the nation’s preeminent educational programs for youth. During his career, Williams has also served as the executive director of the Southern California Leadership Network (SCLN).   The SCLN is one of the nation’s premiere leadership development programs.

Williams served for 11 years as an Assistant City Attorney in the Los Angeles City Attorney’s office where he handled hundreds of criminal and civil matters and tried more than 100 cases. When Los Angeles City Attorney James K. Hahn was elected Mayor of Los Angeles, Mayor Hahn appointed Williams as his Deputy Mayor. Williams served for four years as the Deputy Mayor of Los Angeles for Transportation, Environment, and Infrastructure. Upon leaving the Mayor’s Office, Williams was appointed the Assistant City Manager for the City of Pasadena, where he oversaw the police, fire, planning, water and power, and human resources departments

Williams, a two-time UCLA Chancellor’s Marshall, earned a B.A. in Political Science at UCLA and received a Juris Doctorate from the UCLA School of Law.   Williams has lectured at the UCLA School of Law, USC School of Law, Loyola University, and has provided commentary in national, regional and local media outlets.  Williams is a Fellow at the UCLA Luskin School of Public Policy, a member of Alpha Phi Alpha Fraternity, the Boule’, the Pacific Council and numerous other organizations. A native of Southern California, Williams is married and the proud father of two outstanding sons.