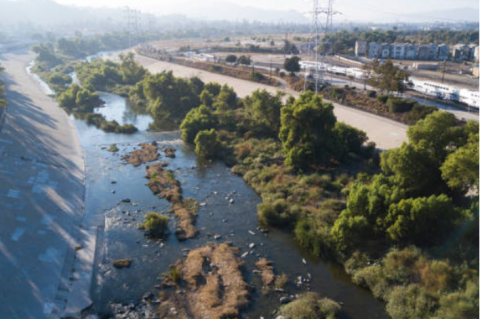 Background
The L.A. River originally ran freely along an alluvial floodplain in what is today the City of Los Angeles. Destructive flooding plagued the region in the 1930s, leading to the Army Corps of engineers to line most of the river with concrete as a mechanism for flood control.

In 1989, Los Angeles Mayor Tom Bradley set up the first task force to look at restoring the river by developing a framework for managing the river for values other than flood control, including public trust uses like wildlife and parks. In 1996, the County of Los Angeles adopted the L.A. River Master Plan, which included limited restoration funding.

Since then, the City of Los Angeles adopted its own Revitalization Master Plan focusing on the river within city limits but leaving out the Lower River that is not in the city's jurisdiction.

Green spaces and community parks play a vital role in the quality of life for urban individuals and neighborhoods. Multiple studies have shown that communities with natural spaces have significantly reduced health risks, including lower rates of cancer, asthma, and obesity. A restored Lower River would provide communities of the Southeast an opportunity to reap these benefits.

The Right Time for Restoration
For many years, the City of Los Angeles has created a revitalization plan and invested considerable resources into restoring the portions of the L.A. River that flow through its borders – primarily the Upper River. Work on the Lower River, much of which falls in L.A. County and Army Corps of Engineers jurisdiction, has lagged.

In 2014, voters approved Proposition 1, the state water bond that allocated $100 million for the L.A. River, including for the Rivers and Mountains Conservancy which has responsibility for the Lower River.

The working group’s goal is to create a robust restoration plan that lays the groundwork for a revitalized Lower L.A. River that connects residents to the river that flows through their communities.

What’s Next?
Now is the time for you to help reimagine the entire L.A. River as an environmental resource for all of Los Angeles County. Help make the river a community resource for parks and green space.

Appointments to the working group are made by the Secretary of Natural Resources in coordination with the L.A. County Board of Supervisors, providing the group both local and state perspectives. Assembly member Rendon along with L.A. County Supervisor Hilda Solis have committed to working closely with all stakeholders to ensure the residents of Southeast L.A. County have a seat at the table.

Development of the Lower River revitalization plan will draw on the work of world-renowned architect Frank Gehry as a foundation of information for the working group's effort.