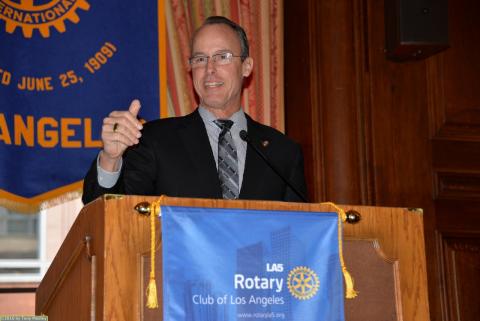 The key takeaway from Bradford Howard’s guest lecture is that the Rotary Club of Los Angeles is not a service organization, rather he believes that the club should channel most of its focus building rapport between members. He makes it abundantly clear that for the Rotary to be truly effective as the servant and protector of the community, LA5 needs to be consolidated from the ground up with members who can trust each other. That is, a shared trust strong enough for two parties to do business with each other, which many argue is one of the strongest of human bonds. This trust spreads throughout various sectors of the club and inspires members to take on service positions or to make it to one extra event.

He points out that the Rotary Club of Los Angeles is different from its counterparts across the nation and the globe. Some clubs don’t serve meals and some don’t have the allotted thirty minutes of mingling, which is cornerstone to LA5’s bonding and business building. Bradford speaks out against the clubs that openly enforce a service only, no self-attitude. The quality of one’s service, especially for an organization, rests on the link of trust and friendship of the fellow working besides them.

Bradford points out that it is okay to join clubs for selfish reasons, because once the self-serving need is sated, that member has better means to act and less external worries to stay focused on the goals of Rotary. If anyone’s drive to join Rotary falls under professional development or personal growth, the Rotary should support these individuals and help them foster connections with other Rotarians. Bradford goes against conventional thinking of what a service organization’s heartbeat should be and it brings a much needed dialogue on how LA5 should actively serve self in order to better serve others.

A quote from Paul P. Harris, founder of Rotary International in 1905,