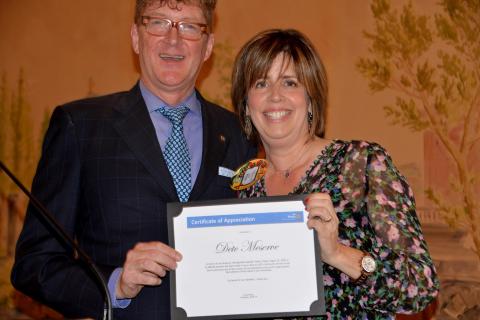 When the world, seems like a dark place through the lens of news broadcasts and TV crime dramas where does one go to feel uplifted and inspired? If you are LA Rotary5 President Erick Weiss you can call up your own positive energy, or for the rest of us, it’s to invite Dete Meserve, Erick’s neighbor and friend, to speak at our Friday, August 10 luncheon.

President Erick introduced Ms. Meserve as a writer and TV and film producer. As we came to find out by her remarks she is that and much more. First Ms. Meserve helped us better understand the role of a producer. She explained, to dispel the myth, its not fancy cars, big houses, glamour and a lavish lifestyle as portrayed in media. Rather, she described the role of a producer as a player in a game of Whack-a-Mole, where as one problem is solved one - or more – pop up.

In her role as a media producer and writer, she says that most important to what the viewer perceives are messages and especially themes. And those that resonate most to viewers are well told stories that can help us better understand ourselves and the world around us, and positively inspire us.

At some point Ms. Meserve grew weary of the negative media barraging her on a daily basis. She said she knew that millions of people were doing positive and extraordinary things every day and there should be a way to get those good acts to a wide audience. After she posted those stories on Facebook it led her to write her first novel, Good Sam, how one act of kindness led to many others. She followed up with her next book Random Acts of Kindness.

In the era of greater transparency, openness and accountability she says Hollywood is changing and we now have more room to present different kinds of messages and stories, especially those inspiring to viewers. To get more of these produced we, viewers, need to seek them out and let media know we are watching and what we want to see.

Ms. Meserve closed by challenging us to take five minutes to look through the wonderful stories and videos on the Good Sam Facebook page. After doing so, she was sure we’d feel more hopeful, and compassionate toward ourselves and others and would give us new ways to see, as things are not usually what they appear to be under the surface.