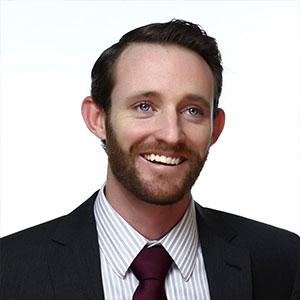 Corey Carter has been a loyal member of LA5 since last Friday, when he was presented at our weekly meeting.  A native of Orlando, Florida he is an active individual both professionally and personally.

Corey earned a Bachelor of Finance Degree from the University of South Florida, along with a minor in Philosophy.  He received the Juris Doctorate from the Pepperdine University School of Law.

He is an avid player of Fantasy Football, and even though Team Carter doesn’t have an official name yet, he did predict the Seattle Seahawks will win the Super Bowl for a second time.

Corey joined Rotary to make business contacts, and also to serve on committees that are involved in the local community.  He provided two adjectives that could describe him to a total stranger:  hungry and optimistic.

When asked whom he would invite to his fantasy meal, Corey replied, Abraham Lincoln, Thomas Jefferson and Prince.  Then, loving food, he added the menu for that meal:  mashed potatoes and gravy, fried okra, macaroni and cheese and a steak.

Make it a point to welcome this fine young Rotarian into LA5.  Welcome Corey!