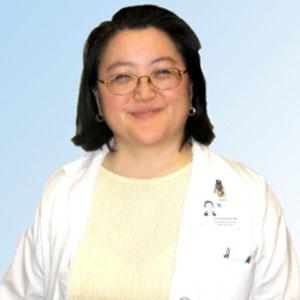 Sumi Kawaratani was born July 24 in Montebello, California and is a practicing physician in Los Angeles. For many years Dr. Sumi has put together the Annual Health Fair for LA5.

After a seven-year combined undergraduate and medical education at the UC Riverside Biomedical Sciences Program, she completed a UCSF Fresno Family Medicine Residency based at the Community Regional Medical Center/Fresno County Hospital. Her first Family Practice was in Northern California at the Southern Monterey County Medical Group. In that capacity her practice included Obstetrics, Newborns and apparently she has a namesake “Sumi” there as well.

She has joined choirs in all churches where she has lived, and has performed with the Madrigal singers at Ramona Convent Secondary School. She and her husband, Lee, also enjoy Ballroom Dancing with teacher Joe Flynn at Westmore Studios.

Sumi is currently training for her fourth LA Marathon. She recommends Douglas Adams’ The Ultimate Hitchhiker’s Guide to the Galaxy for those who enjoy fiction. Make it a point to introduce yourself to Sumi if you have not already done so. She is one of the most accomplished and most sincere Rotarians you will ever meet.