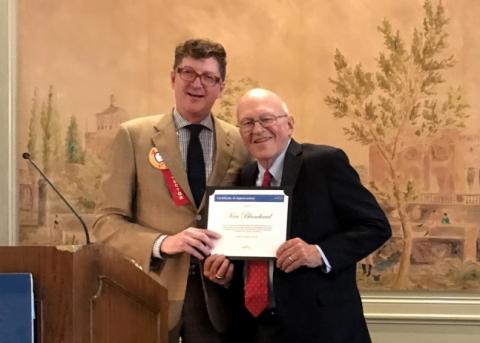 Rotary LA5 was truly fortunate to have heard from Dr. Ken Blanchard, the highly known and respected guru of groundbreaking leadership research and thought who has influenced the day-to-day management of people and companies for many years.

Dr. Ken Blanchard is the co-founder and Chief Spiritual Officer of The Ken Blanchard Companies®, an international management training and consultancy founded by him and his wife, Margie Blanchard, in San Diego, 1979. He also teaches in the Master of Science in Executive Leadership Program at the University of San Diego.

In 1982 he co-authored the classic, The One Minute Manager® with Spencer Johnson which remains in high demand today. Since then, he has authored or co-authored 60 books with 21 million total copies sold including Raving Fans, The Secret, and Leading at a Higher Level.

Dr. Blanchard has a new book sure to rise to the top of the bestseller list, The Servant Leader in Action.  He explained that the term servant leader is about twenty years old but the concept has been around for millennia, exemplified by icons such as Jesus Christ, Gandhi, Dr. Martin Luther King, Sister Theresa, and Nelson Mandela. Leadership has three components: vision, values, and direction. He believes the time is now for this leadership model as many have lost their sense of direction, vision, and values.

The book’s introduction describes the concept as Dr. Blanchard did at our meeting: The world is in desperate need of a different leadership role model. We all have seen the negative impact of self-serving leaders in every sector of our society … because these leaders … think of leadership only in terms of power and control. We think there is a better choice: to lead at a higher level. When people lead at a higher level, they make the world a better place because in addition to results and relationships, their goals are focused on the greater good. This requires a special kind of leader: a servant leader, someone who puts others before themselves to get the best out of the people they lead.

And if this sounds somewhat familiar, our own Rotary motto, Service Above Self is a variation on this concept. The time is right to put it all into action!