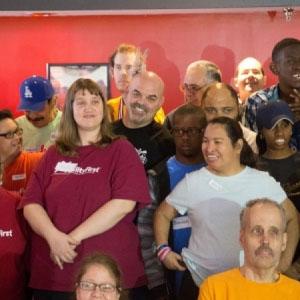 Jonas and Brandon were focused and deadly serious. While laughter and cheers filled AMF Montebello Lanes early on a March Saturday morning, there was a cold silence on lane 31. Jonas and Brandon, members of the Ability First community, were locked in a rivalry match. Only a few pins separated their scores. It didn’t matter that every participant in this extraordinary bowling tournament was guaranteed a medal. Bragging rights were on the line.

For over 15 years, the Rotary Club of Los Angles has teamed with Ability First, a Pasadena based organization that provides programs for children and adults with disabilities, to conduct a bowling tournament for nearly 100 of the non-profit’s special-needs clients. Lori Gangemi, CEO of Ability First and a member of the Rotary Club of Los Angles commonly called LA5, says that the event is meant to benefit both Ability First participants and the Rotarians. LA5 volunteers may help these bowlers lace their shoes and roll the bowling ball down the lane, but the real value is found in the personal interaction that creates respect and acceptance on both sides. “Ability First participants just want to do what most people do on the weekends—relax and have fun,” Gangemi said.

Sixteen years ago, LA5 member Dennis “Denny” Dynes saw an opportunity to combine the effort of two struggling Rotary committees to create this annual tournament. Rotary past presidents, David Bland and Bob Aldrich, recall how it came together. Denny was on the bowling committee and he was having trouble keeping it going. Though the fellowship was fun, he decided the Rotary bowling league needed a higher purpose. So he partnered with the Foundation Gifts committee to form this tournament with Ability First. Both Bland and Aldrich continue to assist the most severely disabled bowlers, finding that they form a bond with these extraordinary people.

Dynes, who passed away last year after a long battle with cancer, envisioned an event where all participants would bowl for a few hours and then would receive a medal at a fun lunchtime ceremony. The Rotary Club has not strayed from his vision. Ben Turner, a self-described “wingman” for Denny continues to organize the event just as Denny would have it. Turner fondly remembers how Denny found so much joy in bowling with the kids, even last year after he suffered through a particularly difficult chemotherapy session.  This year Dynes’ wife, Vonnie, took her place at the registration table as she has in the past, doing her part to support her husband’s labor of love.

The tournament not only draws those who were there from the beginning, but it also attracts new supporters. Tim Brown, board member of LA5, recognized the gap that Dynes left behind and came along side Ben Turner to keep the program going. “This is what it means to be a Rotarian,” Brown says as he surveys the crowd that has gathered to celebrate the achievements of each bowler at the awards luncheon.

AMF Montebello Lanes General Manager, Brian Grant, caught the vision, too. Having been in his post for only three days before this year’s tournament, Grant was not sure how to respond to the lively bunch of bowlers, noting that there seemed to be high energy for an early Saturday morning. “Montebello Lanes is committed to serve our community,” Grant said. He said that he was pleased with the event and said he could see how he and his staff could support it even more in the years to come.

As the clock neared 11:30 a.m., the aroma of cheese and pepperoni pizza signaled that the awards ceremony was about to begin. The sense of excitement, though great, could not match the intensity of the rivalry on lane 31.  Jonas, a giant next to his opponent, Brandon, was about to lose the tournament. He scowled at the remaining pins, determined to pick up the spare. He hurled the ball halfway down the lane before it finally hit wood. It bounced, rolled, and missed the remaining pins. With that roll, Jonas slumped and his countenance sank. Brandon had won. Showing no emotion, he shrugged and reached up to give Jonas a high five. The two sat, unlaced their shoes, returned their ball, and then laughed and walked together to the awards ceremony where everyone was winner.