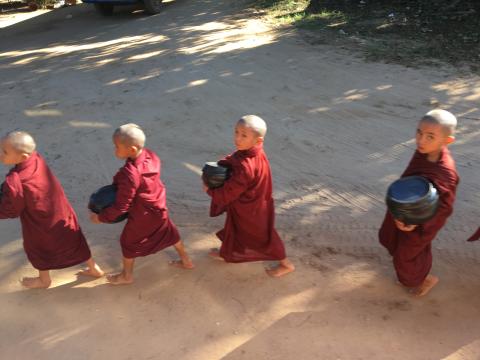 Myanmar (formerly known as Burma) is a nation rich in jade and gems, oil, natural gas and other mineral resources. But Myanmar is one of the poorest nations in Southeast Asia, suffering from decades of stagnation, mismanagement and isolation. The lack of an educated workforce skilled in modern technology hinders Myanmar's economy and its economic success.

The general state of health care in Myanmar is poor. The government spends anywhere from 0.5% to 3% of the country's GDP on health care, consistently ranking among the lowest in the world. 26% of the nation’s 51 million people live in poverty. The lack of clean, safe drinking water is one of the major reasons for illness and premature death.

Rotarians unite at home and across the globe to put our experience and knowledge to work tackling the world’s most pressing challenges. Among the areas we address is providing access to clean water and sanitation.

Rotary International has led the fight to eradicate polio, once thought to be impossible, and now has turned its attention to other crises that humanity faces. One of those areas is access to clean water and sanitation.

Following the core values of Rotary International, the Rotary Club of Los Angeles has undertaken a project to construct water systems throughout the country of Myanmar. Funded by grants from The Rotary International Foundation and various clubs and districts, our project has constructed an adaptable, safe-water system of our own design for Christian orphanages, Buddhist monasteries and autonomous villages in Myanmar. To date 64 systems have been installed and are in operation.

Through the influence of J.T. Warring, the Rotary Club of Yangon, Myanmar was chartered in May 2014, and they now have 65+ active members, with a diverse, locally influential composition. We have allies on the ground in Myanmar.

The current government officials have asked if Rotary could spearhead construction of another 20,000 water systems that are needed in villages throughout Myanmar. Our current plan is to build six more water systems in 2018.

The recipient orphanage, monastery or village owns, and is therefore responsible, for their system post-construction. It is a gift from Rotary to each of them. Our first-generation- designed systems were anticipated to last a minimum of 30 years, with proper maintenance. A more recent evolution should add at least 15-20 years to that.

With a worldwide tsunami of life-threatening diseases, economic struggles at all levels of existence, not to mention the constant threat of a terrorist attack anywhere at any time, a few thousand dollars for water in Myanmar appears to be nothing but a drop in the bucket. That’s precisely what it is, but it’s a drop that does not stop on impact.

Why water? Without clean water and proper sanitation, the fate of any civilization is disaster. There is no way around this reality.

Why Myanmar? The world has noticed its struggles, as well as its attempts to solve problems. Now many countries are stepping up to assist in any way possible.

The Myanmar Water Management Systems Project is not simply a campaign by one club or district. This is an undertaking that, once its impact is known throughout Rotary, will spread to many other nations throughout the world.

Why Rotary? Given our six areas of focus, along with 1.2 million Rotarians in more than 35,000 clubs throughout the world, what succeeds in one context will open up similar projects all across the global community.

It currently costs approximately $10,000 to construct one water management system, with a life expectancy of 35–45 years. A Rotary Club of 50 members could underwrite one project in Myanmar with each Rotarian donating $200. Several smaller clubs could work together to finance one, or several systems.

The genius and wonder of Rotary is that we can work with Rotarians across the city, or throughout the world. And, one Rotary club’s success serves as the impetus to recruit more clubs to do the same. Rotary accomplished this with polio, and now water is at the top of our Service List.

Drop a rock in a bucket of water and ripples will be created from the point of impact in all directions. That’s what started years ago when Rotary International saw a nation in need and stepped in to help. Ripples continue to reach out and impact more lives, with more systems, creating more help and hope to a nation in need.​​