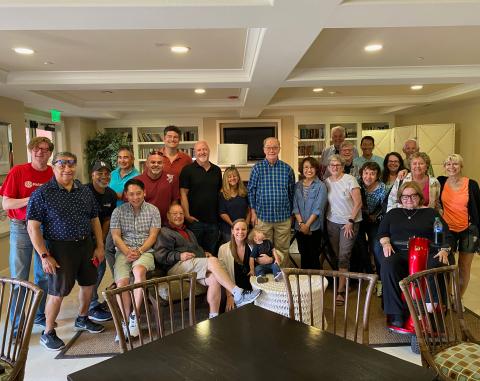 What does it sound like when the Fifth Oldest Club says goodby contemporaneously to 16 months of Zoom and LA5’s favorite Rock Star couple, Paul and Diane Netzel? Well, just listen to the sound of the unscheduled Farewell party in their condo Club Room with about 25 delighted members and one adorable child (he occasionally in Charisse or Nick’s arms) and you will know. It bordered on the deafening.

Everyone understood two things about the departure of the Nertzel's for Reno: there would be a significant Farewell event but in light of the LA5 calendar and theirs, it would be lively, raucous and border on the spontaneous. 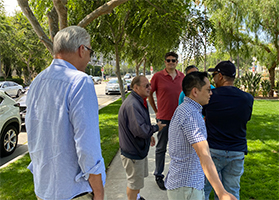 At the agreed time on Sunday afternoon, Paul N got a phone call from Prez Paul who was waiting on the steps of their lovely condominium complex in the Playa Del Rey area. Upon opening the door to admit him, Mr. Netzel spied a motley crew of LA5 usual suspects deep in the background. Paul coyly did not signal recognition. He immediately knew two things: LA5 had dropped in to bid them a fond farewell AND this was now his party and HE would decide when it started. Paul ignored the milling gang and ushered newly installed Prez Paul into the Club Room. Then a slightly minimized discussion took place as the Rotarian who had done it all throughout the world welcomed and counseled the 113th LA5 President. 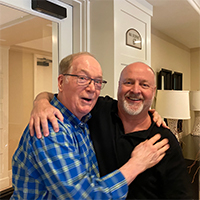 Neither will divulge the details but for obvious reasons neither will forget the event.

Then Mr. President announced that alas a few members had accompanied him and were waiting outside for an audience. “Well why didn’t you say so?” Replied Paul with a twinkle in his eye “Let’s bring them in!”

The thirty well-wishers were welcomed into the Club Room. Then for about 10 minutes (check out one of the videos here or in ER) it was pandemonium as the members greeted the Netzel's and one another. 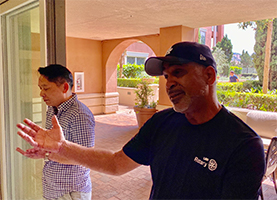 Then several people tried to address the exuberant crowd but of course things only quieted down when Mr. Netzel started to speak. Although obviously surprised and delighted, he spoke with his usual poise and flair. He thanked the assembled profusely for dropping in so delightfully to wish them well on the new adventures ahead. He mentioned the couple’s arrival in the LA area about 53 Years ago and mentioned the exact date on which he became a Rotarian.

And of course Diane spoke a few well-chosen words of thanks and some fond reminisces about what LA5 had meant to them both. 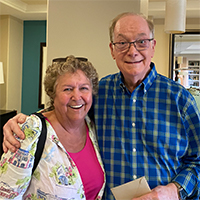 Of course our jolly pal PDG Melody was in attendance with our dedicated member Paul. A quintet of LA5 Past Presidents being present each lost no time and participated in playful banter with honoree Paul. Ken Chong extracted a promise that Paul’s cell phone number would remain the same. “Well of course I will be remaining a long-distance member of LA5 and want to make it easy for my many friends to stay in touch.”

Then after an hour or so, no one looked at their watch and no bell sounded but the Netzel's thanked everyone for coming. The gathering came to an end. Our departing crowd passed a couple of old friends of the Netzel's on the stairway into the building who had just flown in from Hawaii to say aloha. What else would you expect?

Farewell Paul and Diane. Godspeed. We LOVE you!!! 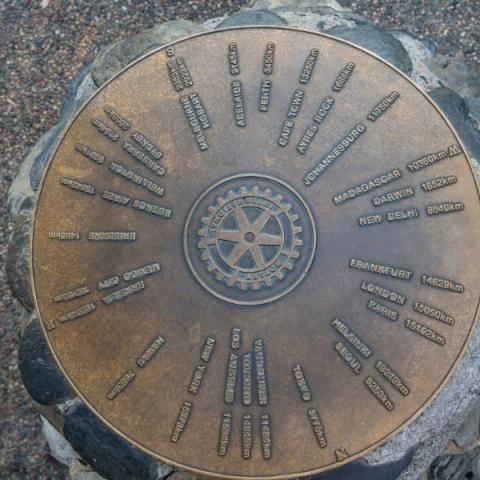