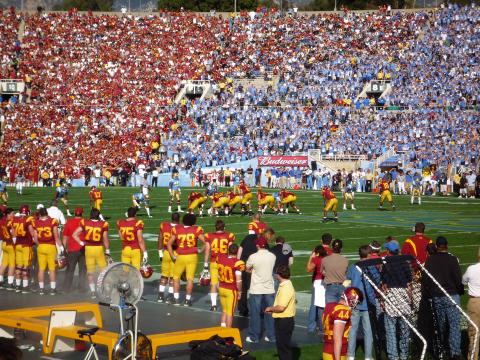 The USC-UCLA Rivalry week is Coming: Some Facts You Need to Know

LA5 has a rich history of celebrating rivalries and perhaps the biggest one is that between USC and UCLA as so many of our members attended one or the other (or both) universities. To be more inclusive of our members who attended other excellent universities locally and across the country, we’ve decided to encourage members to wear something that helps them to show off their alma matter in the spirit of competition.

Speaking of competition, there will be special “medals” for members who bring guests: silver, gold, and various sizes, depending on how many guests each member brings. AND, for the member who brings the most guests, we’ll have a very special prize. The meeting should be a ton of fun and we’ll also have some amazing live auction items that you’ll be able to win! So start texting, emailing, or calling your friends and colleagues and let’s pack the house with guests and celebrate rivalry day together!

In case you’re wondering about the origins of our Rivalry Day celebration, here’s some history of what began as a cross town rivalry celebration:

ONLY 11 MILES separate USC’s University Park Campus and UCLA’s campus in Westwood. In the minds of many of the Trojan and Bruin faithful, though, they couldn’t be further apart.

Los Angeles’ classic crosstown college rivalry comes down to (mostly) friendly competition, from academic quality to annual spirit traditions. But nothing distills the USC-UCLA discord to its essence like athletics — especially football.

Leading up to 2021’s version of the rivalry game this weekend, we offer our own snapshot of the competition below. If you’re a fan of either Los Angeles university … and it’s OK if you get a little fired up as you read it. After all, as famed Bruin football coach Red Sanders liked to say, the USC-UCLA rivalry isn’t a matter of life or death: “It’s more important than that.”

Dating back to their first matchup nine decades ago, USC holds the edge over UCLA in football with an overall record of 49 wins, compared to UCLA’s 32 wins with seven ties.

And to each year’s victor go the spoils: a 295-pound brass bell.

Originally mounted atop a Southern Pacific freight train, the Victory Bell came to symbolize the rivalry — after a bit of chicanery. The UCLA Alumni Association had donated the bell to UCLA in 1939, and Bruin cheerleaders marked each UCLA point with a resounding clang. But after two seasons, some USC fans had enough of the ringing. Members of USC’s Sigma Phi Epsilon fraternity absconded with the bell after UCLA’s season opener in 1941 and kept it hidden for more than a year.

When evidence of the stolen noisemaker resurfaced in a USC publication, UCLA students retaliated by painting Tommy Trojan blue. USC students struck back by burning USC initials into a lawn on UCLA’s campus. Anxious to stop the hijinks, the USC president threatened to cancel the annual football game if any more mischief occurred. Then, in 1942, the student body presidents reached a deal: The winner of the football game would keep the bell for the rest of the year.

Since that 1942 showdown — a 14-7 UCLA win — students from the victorious school have sandblasted and painted the bell’s carriage cardinal (44 times) or blue (32 times).

Battle of the Mascots

What’s a great rivalry without symbols to rally each side’s fighting spirit?

Traveler embodies the spirit of ancient Troy. USC’s official mascot since 1961, this noble white steed fires up the crowd during football games at the Los Angeles Memorial Coliseum. After every touchdown, Traveler gallops down the sideline as the Trojan Marching Band blasts “Conquest.”

Other USC mascots also popped up through the years, some more official than others. Arguably the most famous remains George Tirebiter. known for chasing cars across the University Park Campus, the terrier first appeared at football games in the 1940s. Students quickly adopted him as a campus hero, despite his reputed mean streak. Tirebiter’s notoriety only grew when he attacked UC Berkeley’s mascot in 1947. He posed with homecoming queens, rode in parades and even survived having “UCLA” shaved on his hindquarters during an infamous Bruin dognapping. After his untimely death by automobile in 1950, several other Tirebiters followed.

USC fraternity brothers swipe a large stuffed bear known as Joe Bruin from the foyer of the Bruin Theatre in Westwood before the crosstown rivalry football game in 1952. (Photo/Courtesy of University Archives)

UCLA also has its share of memorable mascots. In the 1930s, a live bear and its trainer appeared at games. That proved unwieldy. After several other attempts to bring in live bear mascots in the 1950s and 1960s failed, the Bruins settled on costumed students. Joe Bruin and Josephine “Josie” Bruin are now a familiar presence at UCLA athletic events.

Another prominent symbol of USC’s “Fight On” spirit is The Trojan Shrine, often referred to as Tommy Trojan. The bronze statue of the warrior, sculpted by Roger Noble Burnham and unveiled in 1930, stands at the heart of the University Park Campus. Its base displays the university seal and the five qualities of the ideal Trojan: faithful, scholarly, skillful, courageous and ambitious.

UCLA’s campus across town boasts its own bronze monument: The Bruin, a 2-ton bear sculpture by artist Billy Fitzgerald. Unveiled by the UCLA Alumni Association in 1984, it stretches 10 feet long and stands 6 feet tall.

Both statues naturally have become the target of mischievous pranksters, particularly during the leadup to the annual football showdown. Tommy Trojan got his first, but not last, coat of blue paint in 1941. USC vandals have splattered The Bruin with cardinal and gold several times as well. Security measures now go into effect each autumn in the week before the USC-UCLA rivalry game. Guardians wrap Tommy in plastic and duct tape, and The Bruin goes into hibernation in a plywood cave.