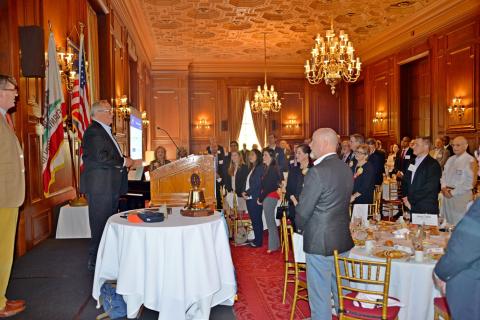 Few adults living today are unfamiliar with the name of ENRON and the financial debacle that resulted in the company’s dissolution in 2004. And no one could be more qualified to speak on the company’s financial ruin more than its Chief Financial Officer at the time, (CFO) Andy Fastow.

On October 12, LA5 filled the club’s venue to hear Mr. Fastow tell a cautionary tale about what may be right – that is, rules, but also may be wrong at the same time – principles.

He began by stating the only reason he was speaking to us was that he was sent to prison, noting, he didn’t get another invitation to be ENRONCFO! Now he is speaking to accounting firms, accounting students, and big corporations about what took place, his role in it, and most importantly, what people should be looking for as they make financial decisions.

He stated, “I believe that what I did was wrong, unethical, illegal and probably the person most responsible for ENRON’s failure. I apologize and I am sorry.”

He then showed a brief video entitled Rules versus Principles and a case where a financial decision was made based on a legal and correct rule. The video and the case clearly illustrate that there is a difference between the two. And while the rule may be correct and legal, how it is applied requires thinking about what is “right” - in the context of the decision, not solely the rule.

Mr. Fastow said as ENRON’s CFO he didn’t believe he was committing fraud and pointed out several legal “rules” he used to present ENRON’s financials as positive and growing. He held the CFO of the Year award, so named by CFO Magazine for his creative use of off-balance sheet accounting and structured financing, both then legal applications. Though they were considered “loopholes.” This is the gray area that in some cases is right and in others wrong and as Mr. Fastow underscored, can be very difficult to discern especially when one is in the midst of it.

By the next year, critical articles were appearing about these financing applications and in a few months, ENRON declared bankruptcy.

Soon thereafter ENRON was investigated and Mr. Fastow was arrested by the federal government for criminal fraud. After pleading guilty he received six years in Federal prison. It was then that he considered his actions. By opening up to his Rabbi and to his son, he realized that what he did was wrong, that he deserved to be in prison, that his actions hurt many people, and that rules, without considering principles are not necessarily ethical or right.

His main takeaway for us - to consider our actions and decisions in light of both rules and principles, taking ethics - what is “right” and the spirit of the rule - into consideration, and to know the difference.

While some members may have had concerns about our club featuring a convicted white-collar criminal, once attendees heard his story, his regrets, and what he learned, they hopefully saw beyond the headline news. Mr. Fastow is now passing on these lessons to others, with the hope that they too can apply principles over rules before it is too late.

One member Kevin Cape commented, "It was certainly uncomfortable to hear Andy's evidence that much of the issue is systemic, yet, extraordinary acts of individual integrity can avoid the types of wrongs for which he received so much publicity. I certainly walked away with a heightened sense of responsibility as a Rotarian business leader."