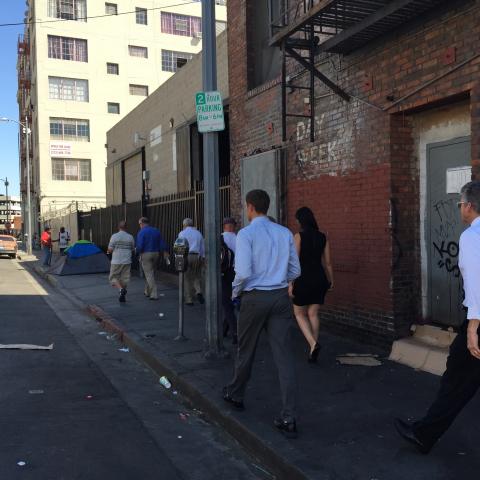 I learned a lot from our Skid Row Tour. First, Larry Hurn, Executive Director of the Cardinal Manning Center, delivered a history of downtown homeless issue which delivered valuable insight. Then Kevin, formerly homeless and expert at serving the Downtown Homeless, led us in a 40 minute walking and talking tour. We saw the infrastructure in place to serve the residents and he shared “how it works”. (Note: Gina Doyle, the new Development Director @ St Vincent de Paul, delivered these excellent resources for our educational outing and should be thanked by all.)

Some Key Takeaways from this Experience

There is a significant infrastructure amongst the population there. Violence is not overwhelming Kevin told me....as we happened upon a 55 yr old woman sitting on the sidewalk with a purple swelling eye. She had already been to the hospital who sent her to a clinic, who told her they would see her in a week. That said, we felt safe to walk the real streets full of the residents of Skid Row - living - and in the process of raising their homes for the evening, without so much as a hint of negative interaction. I asked Kevin about an attractive Asian woman, sitting just off the corner of 4th and Main, on a bed roll and a piece of cardboard. What’s her story, I asked. What does she do? He looked me in the eye and said... “she lives there, that’s her spot”.

The most impactful fact learned though was the answer to the question—why is the population growing at such a dramatic rate the last couple of years? The answer given was quite surprising to me, made perfect sense, and illuminated the startling reality of the issue here in Los Angeles. We are not the homeless capital of the world for nothing. The more we do to solve the problem in a real way here in Los Angeles—the more the homeless from throughout the nation migrate here. This reduces the pressure on for example, major US cities to address homelessness, as they watch the population stabilize and decline in their zip code.

Finally, the mental health component represents 30% of the Skid Row population. More investment and a new plan for service to this element of the population, seems obvious as a high impact idea. Another high impact idea—clean socks. Foot disease is chronic and debilitating...and on a related note, mobile showers were mentioned as a welcome idea too.

The experience was just as intended -  illuminating, educational and emotionally striking. Much like my Rotary Humanitarian mission to Guatemala, a great Rotary experience in humility, service and appreciation.